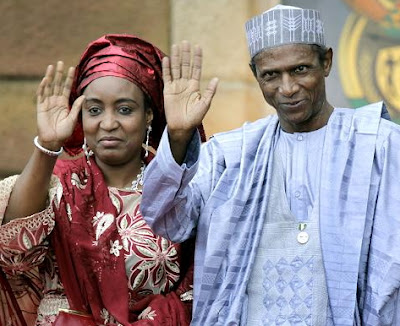 Former First Lady, Hajiya Turai Yar’Adua, wife of the late President Umaru Yar’Adua, has handed over to the police her 70-year-old domestic servant, Malam Yusuf Jikwando and his two sons, over missing foodstuffs and an undisclosed amount of money.

Jikwando, who is the longest serving domestic servant to the Yar’Adua family, was allegedly arrested two days before Eid-el Kabir in his house at Samji Quarters in Katsina. It was learnt that the arrest followed Turai’s directive to the state Commissioner of Police, Abdullahi Mohammed.

A man close to the family said that five well-armed policemen invaded Jikwando’s house and searched the entire house, but only found three measures of rice and a quarter bag of maize. According to him, Jikwando’s eldest son and second to the last born were later arrested.

He said while Jikwando’s family members and relatives tried to go and see the former first lady in Abuja over the arrests, five people, among them the man’s wife, had an accident near Kankara village. According to him, the victims sustained serious injuries.

Sources said Jikwando served the Yar’Adua family for over 40 years and was never found wanting by the late President. According to one of Jikwando’s sons, the family hardly eats three square meals a day despite their father’s closeness to the Yar’Adua family. He said their father celebrated the Eid-el Kabir in Katsina prison without being taken to court. The son said Turai was not specific in her complaint against his father.

The Jikwando family members appealed to President Muhammadu Buhari, Governor Bello Masari of Katsina State and the Human Rights Commission to come to their aid. According to them, injustice anywhere is a threat to justice everywhere.