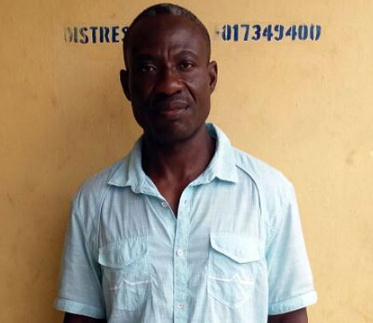 The cleric who reportedly battered a family member of his US-based wife in Lagos last week has been arrested.

As earlier reported by NaijaGists.com, Rasak Alabi reportedly used cable wire and spanner to attack one Latifat Adeyemi at their home in Ikorodu on the 9th of September.

He was nabbed at his hideout in Ikorodu around 1:30pm this afternoon.

Mr Alabi reportedly struggled with the officials before he was overpowered.

His case has been transferred to SCID for investigation and prosecution.

Now that he has made name for himself in the media, hope his wife abroad will learn a lesson.

This man kicked his mother-in-law out the house his US-based wife built over 20 years ago.

The couple who broke up about 20 years ago reconciled recently.