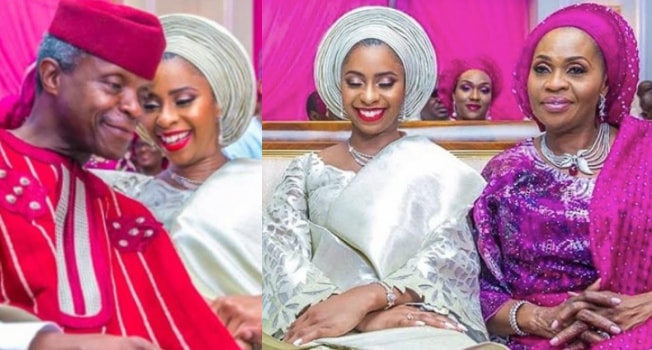 Vice President Yemi Osinbajo has not been happy with the involvement of his in-law, Bola Shagaya in numerous fraud battles with the Economic and Financial Crimes Commission, EFCC.

Sources close to Prof Osinbajo said he has been quite disappointed about the issue, as he sees it as a stain on his image and family as a born again Christian and Vice President of a government that is kicking against corruption

Some days ago, the EFCC urged the Federal High Court in Lagos not to unfreeze a Unity Bank account with a balance of N1.902,673,399.93 belonging to Shagaya, a business woman. The EFCC claimed that the N1.9bn was the balance of a total of N3,305,150,000 which Shagaya received as founder fees on behalf of an organization, Women for change being spearheaded by former First Lady Patience Jonathan.

According to the EFCC, the money was realised through Shagaya frauddulent activies in the NNPC where she allegedly influenced the allocation of Dual Purpose Kerosene to index Petrolube Africa Limited, with the aid of the former First Lady.

The N3.3billion was paid by the Index Petrolube Africa Limited and its sister company Autodex Nigeria Limited.

The EFCC claimed that out of the N3.3bn, Shagaya had paid a cumulative sum of N1,212,000,000 to Patience Jonathan through her women for change initiative account domiciled in Diamond Bank to which Mrs Jonathan is the sole signatory.

The EFCC said it secured an order to freeze the account on the 29th of December 2016.

The anti graft agency begged Justice Oluremi Oguntoyinbo of the Federal High Court in Lagos not to unfreeze Shagaya account.

Shagaya is still fighting to unfreeze the account holding the fraudulent money.

Some even said she gave her daughter to the Vice President to have her way with the court.