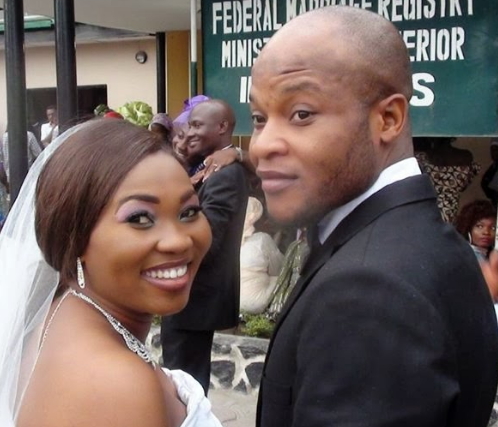 One of the popular female film producers in Nollywood, Yewande Adekoya is among the few scandal free actresses in the industry today.

In a recent encounter with YMG reporter, the actress discussed how she met her husband, Abiodun Ishola Thomas, who is also an actor and movie director and how they have managed to keep their marriage from the storm since 2013.

What was the side attraction?

I think it was just God because this is the issue of 2 different people coming together. May be it has been written that it will be like that because both of us didn’t know each other before we started. God did the link miraculously and the rest is now history.

By the time you got to know that he is equally in the same industry with you, did you have a rethink of withdrawing yourself from the relationship?

No! He is a very mature person and with God, I believe nothing is impossible. If you hand over your activities into the hands of God, you will definitely be saved.

Since 2013, how have you been able to cope with him in the industry?

We’ve known each other over 9 years ago and we got married 4 years ago, so I will say it has not been easy but God has been with us. Husband, kid and work are not a mere task.

You are married in the same industry with your husband; can this disturb you from playing some roles?

Even before I got married to him, you can ask him, I have my restrictions. I have the things that I don’t do even before marriage, after marriage is still the same. I can’t play nude roles and that has been from the very beginning even before I met him.

Their marriage is blessed with two kids ( a boy and a girl).