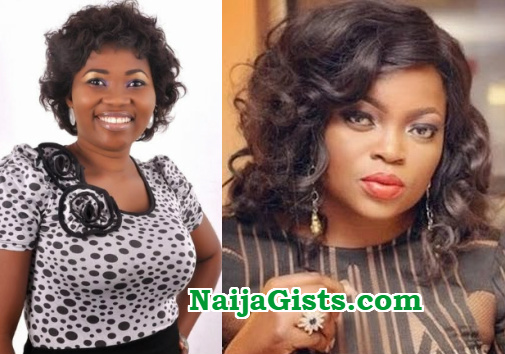 April 11, 2017 – How Yewande Adekoya’s Emergence Chased Funke Akindele Out Of The Yoruba Movie Industry… See The Person Behind Her Success

Sentiment aside, the lady who allegedly forced Funke Akindele to stop featuring in Yoruba movies has been identified as the one and only Yewande Adekoya aka OMO ELEMOSHO.

The beautiful mother of one who produced blockbuster movies like Igbo Dudu, Kudi Klepto, Kurukuru and Omo Elemosho is set to become the highest paid actress in the Yoruba movie sector.

According to an insider, her emergence reportedly forced Funke Akindele to lay low.

Acting for her started in 2002 with Alphabat Theatre group but in 2009, she met Sadiq Adebayo (Femi Adebayo’s brother) through Antar Laniyan when she wanted to produce a soap.

Sadiq Adebayo reportedly advised her to join the Yoruba speaking genre of Nollywood if she wants to succeed in the industry, an advise she took in good faith.

She reportedly wrote and produced Igbo Dudu that same year.

Today she has become a force to recon with in the Yoruba movie industry.