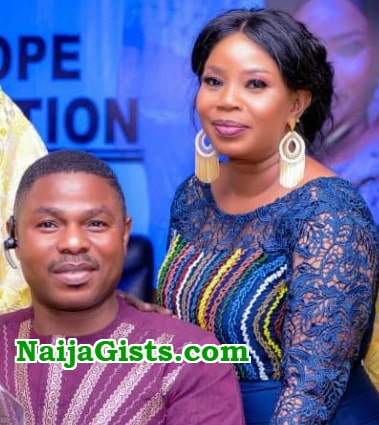 How I Met & Married My Coworker’s Cousin – Yinka Ayefele

Excerpt of gospel Fujician Yinka Ayefele‘s recent chat with Adeniyi Adewoyin on his kids and how he battle pain every hour of the day.

What informed your decision to own a radio station?

I have been in broadcasting for years and I have always wanted to add value to broadcasting in Nigeria. What I used to do then when I was with Radio Nigeria inspired me. I was working with Kola Olawuyi and working with FRCN. I started with internet radio to test my ability to see if I would be able to maintain the terrestial broadcast and with what I had then, I had the highest listeners when it comes to internet radio. The ability to maintain those listeners gave me the courage that I could actually do it so that was when I put in for the license and fortunately I got it.

With all your struggles to bring the station to life, what went through your mind when Oyo State government demolished a part of the radio station?

What Oyo State government did proclaimed more about Fresh FM, and about Yinka Ayefele. So anything that comes my way God allows it for a reason, and for a purpose. If anything happens today, definitely God wants to write another story about me. We can work around it and it won’t happen but God allowed it to happen. it’s just like when God hardened the heart of Pharaoh.

What is your relationship with the former governor now?

We are very close now. Former governor Ajimobi will be at the dedication on Sunday. He promised to come.

I went to Mama Esther Ajayi’s church and she said we have 50, 55, 60years old women who gave birth. She said ‘Yinka Ayefele, God said He is going to do it for you very soon if you believe. I said Mama, I believe. That was about two years ago and it has happened.

Are we expecting an album on this?

There is already an album. I had my children on January 18. I knew they were coming and had done their album last year. I knew my joy is here.

Can you clear the air about the number of years you were childles. Some say it’s not up to 25 years?

There might be miscalculation. I got married in 1998 so it’s 22 years or thereabout.

When is the Ado Ekiti Radio Station coming up?

We are setting up.

Are we likely to see you on TV as well?

The task of having a TV station is much. I am afraid of going into that. But if God wants me to start a TV outfit tomorrow, it will definitely take off. I am afraid of taking off with visual transmission because you report what you see but radio you don’t need to report what you see. Visuals require a lot of crew unlike radio. I don’t want to just do it because people are doing it, I will want to do it perfectly. I want to emulate BBC, Aljazeera and CNN. If I cannot do it that way, then let me not do it at all.

Does that mean Nigerian TV stations are not doing it right?

I’m sorry. Personally, I am not too satisfied with the Nigerian TV. TVC, Channels are doing very well. others are doing well too but if they are not getting musical and movies. Most of them cannot transmit. If the actors and musicians stop working today, they won’t transmit. They really need content providers. Look at TVC and Channels they are doing very well. those are the people I can look up to and set up myself.

How are you combining being a media mogul and a musician?

I like being restless. I love it because I am in 24 hours pain. I am in pains as i am talking to you. I had five ribs broken. I just make sure that I keep my head busy. I go for shows, I present on radio, I direct and I produce. I just want to make sure that I keep myself busy so that I don’t have time to think of anything except I just go home to sleep.

How much are you involved in taking care of the kids, like wearing them their diapers?

I am very much involved. I’ve done that this morning that is why I came late. Richard was with me when you called.

What are their names?

Richard is baby A, Eniola is baby B while Raymond is baby C.

How did you feel when you first got the news that you were becoming a dad?

I have been restless because I never knew it’s going to happen. I cannot say exactly that this was how I felt. It’s been mixed feelings. When is it coming? When am I seeing them?

Have you ever had the thought that this moment might never come?

I will never give up. I know I am stubborn when it comes to things like this. I don’t take defeat. I will always want to win. I have always believed that one day, I would have my own children. That is why I am still saying and I believe that one day I will still walk. Everything is possible with God.

Will you encourage your kids to do music if they show interest?

Eniola dances already at just seven months old. I will definitely support them if they want to do music.

You had earlier denied welcoming triplets, why?

I denied it once when it happened. The news broke and a lot of people were talking about it. The babies were so tin. I was scared and didn’t want to lose them after waiting for so long. I wanted to wait until they were grown. My pastor told me that God that did this for me would definitely keep them so I shouldn’t be afraid.

Glory be to God it is a bundle of joy. I welcomed the triplet on January 18 of this year in the United States. What I have been waiting for so many years. I give glory to God. I was expecting one but God surprised me with three- two boys and a girl.

We thought you had given birth before…

Well, my siblings stay with me and you know in Yoruba land we call them (our sibling’s children) our kids as well. So I have been using them as a point of contact that one day, God will answer my prayers. I have been their father, handled everything about them and they are still my children. 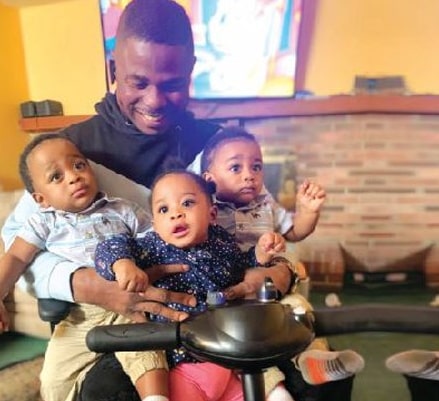 With three beautiful kids now, should we be expecting more?

Of course, I don’t mind having another set of triplets, even if I can go as many as 20 I don’t mind. It is what I have been praying for. The pain of going up and down looking for it and at the end of the day it goes a long way.

When you say going up and down, what do you mean?

I mean going to mountains for prayers and going to so many hospitals for tests. You know Yinka Ayefele is on wheel chair, a lot of people see it something that could not happen. But with series of test in the US and UK eventually it happened. So I give God the glory.

I met my wife before I had an accident. I was working with the FRCN. Most of my colleagues then brought their jingles for me to produce. It was along that line that I met one of my colleagues’ cousins then who turns to be my wife today. She stood by me all along since I had the accident in 1997. 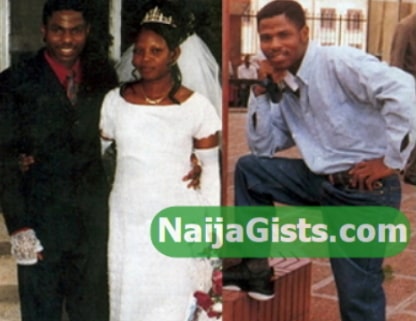 How have you been able to penetrate the Nigerian music scene as a whole with your situation?

It only takes the grace of God. there is nothing special about Yinka Ayefele, its just God’s grace. Yes, I play good music but there are people who play my pattern and even do it better than I. I just think it is the grace of God.