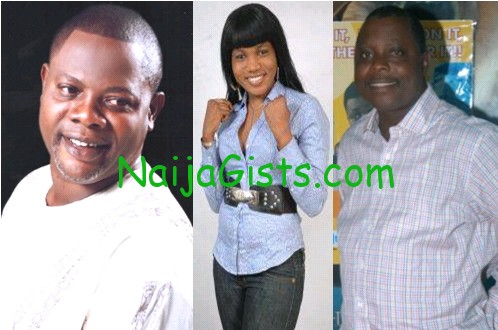 Few days back talented Nigerian actor Yinka Quadri and his best friend, Dele Odule were reported to have engaged in a serious exchange of words over a damsel named Bisi Komolafe, another Yoruba actress. naijagists.com

This happened on a movie set for an upcoming Sanyeri movie.

According to eyewitnesses, Bisi Komolafe knelt down and apologized to Dele Odule to get past the issue.

The following day, we learnt Bisi snubbed the actor to avoid another confrontation. The actor quickly called her back and called her attention to the fact that she didn’t greet him.

Bisi quickly apologized and said it was an oversight.

Despite Bisi’ countless apologies, Dele went on abusing her and in the process he called her attention to the fact the he is even more educated than Bisi and his Boss Yinka Quadri.

Actress Bisi Komolofe quickly walked away from the incident to avoid making a scene. She later called Yinka Qaudri’s attention to the matter on ground.

According to sources Yinka quadri was the man who trained and groomed Bisi Komolafe in the Industry.

According to sources on the movie set, Dele Odule quickly called Yinka to report Bisi to him. During the conversation, Yinka simply shut him up asking him why he was calling him since he had earlier called him an illiterate behind his back.

This is not funny.

Guess Dele Odule might have a crush on her.

Article submitted by an anonymous witness on movie set.