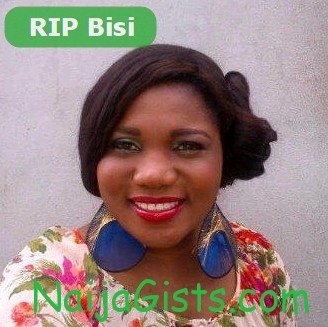 Few hours ago NaijaGists.com receive an inquiry email with the subject “Is Bisi Komolafe Dead“. naijagists.com

To confirm if it’s a hoax or rumour we put a call through to a Nollywood insider in Ibadan, Oyo State Nigeria, the source said he is just heading to the hospital for confirmation.

Just a couple of minutes ago, another Nigerian movie producer Yinka Quadri has authoritatively confirmed that Yoruba actress Bisi Komolafe has died.

Our sources revealed that the late Bisi Komolafe suffered a strange miscarriage few weeks ago and she lost lots of blood.

She was rushed to the University College Hospital (UCH) in Ibadan where she eventually died on New Years eve.

Yoruba actor Yinka Quadri said he saw Bisi Komolafe on Sunday in a very terrible condition. He said he had reached out to elders of the Association of National Theatre Practitioners (ANTP) on the need to reach out and help raise fund to begin her treatment.

Bisi Komolafe is survived by her aged parents, brothers and sisters.

May God grant Bisi Komolafe’s family the fortitude to bear her loss and may her soul rest in perfect peace!

For Naija News Update please keep in touch with us at naijagists.com