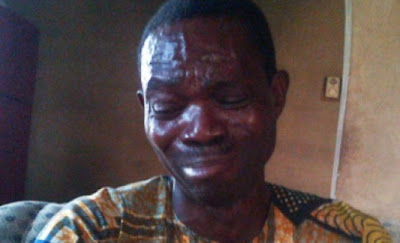 Father of the deceased crying

Why should a young girl suffer so much pain before she was so callously murdered? That is the question that residents of Idimeta village, Ibaragu, on the outskirts of Abeokuta, the Ogun State capital, are struggling to find an answer to.

Bilikisu Adeyemi, a 16-year-old groundnut hawker, was allegedly raped and then shot dead with a local gun in the community on July 31. The suspected assailant is 20-year-old Ajibawo (other names withheld by us), the son of a local hunter in the village.

So, how did Bilikisu meet her untimely end in that gruesome manner? Daily Sun gathered that Ajibawo had called Bilikisu into his parents’ house after informing her that he wanted to buy some groundnuts. The unsuspecting girl then left her fellow hawkers to attend to Ajibawo in the house. Her mates said after waiting for a long time, they decided to find out what was keeping the girl in Ajibawo’s place. That was when they found Bilikisu’s dead body in a pool of her own blood at the entrance of the Ajibawos’ house. Shocked at the strange discovery, they screamed and the neighbours came rushing out.

An eyewitness, who claimed she heard Bilikisu’s cries before she was shot dead, told the reporter that the poor girl must have been killed after being raped by Ajibawo.

The woman, who craved anonymity, said: “That boy, Ajibawo first succeeded in raping the poor girl. He wanted to persuade her at first but she refused. So, he forced himself into her. I heard the poor girl’s cries, saying God would judge him for the evil that he did to her. The girl was also saying he would expose him to the whole villagers. I think it was at that time that he took his father’s local gun and shot the poor girl. We heard the gunshot and the girl’s last cry. That was when we knew something terrible had happened. Bilikisu’s fellow hawkers later alerted us that one of them had been shot and we rushed to the spot to confirm the incident.”

Ajibawo fled the community immediately after the incident. But policemen from the Ayinla Police Post were able to arrest him three days later in his hideout.

Blood was still on the floor at the entrance of Ajibawo’s house when the reporter called at Ibaragu community. The house has since been deserted. Meanwhile, a pall of gloom enveloped the community, as residents wore palpable sorrow on their faces.

Those who spoke with the reporter said the blood on the floor was Bilikisu’s. They added that Ajibawo’s parents and other relatives of his had since disappeared from the community since the police arrested the suspect.

Elder brother to Biliku’s father, Chief Adewunmi Adeyemi, said Ajibawo had in his statement at the police station, confessed that he killed Bilikisu with his father’s local gun. The suspect was, however, silent on the rape accusation.

Adeyemi, who spoke with the reporter in his house at a village near Abeokuta, said: “Bilikisu wouldn’t have died had his mum not insisted on taking her to Ibaragu. The mother wanted the little girl to help her in her business. Bilikisu was staying with her parents in Ijoko before the parents had a quarrel and separated. The mother relocated to her hometown, Ibaragu, and later took the girl with her. It was barely two weeks after taking Bilikisu to Ibaragu that this tragedy happened.”

When the reporter spoke with Bilikisu’s father, he could not control his emotions. “This is too much for me,” he sobbed. “This tragedy is too much for me to bear. My girl was a very brilliant girl. She was doing very well in school and I was about to register her for a part-time apprenticeship in tailoring when her mother forcefully took her to Ibaragu, following our quarrel. I have even bought a sewing machine for her training. This is the receipt of the sewing machine that I bought. I never wanted her to hawk anything. She was very bright in school and since neither me nor her mother is educated, I wanted her to go to school and become a big person in future. Here are her school results. You won’t see her scoring below 60 per cent in her subjects. She was in form three at the Odewale High School, Itoki, Ogun State, and her teachers were always fond of her because they said she was very quiet, well-behaved and intelligent in class. How would I ever recover from the shock and grief of losing such a precious gift from God?”

An elder sister to Bilikisu’s father, Madam Monsurat, who spoke with the reporter on phone and relayed how painful the sudden loss had been for the family, said all the family wanted was justice. She appealed to the Inspector General of Police, Mr. Abubakar Mohammed, Ogun State Police Commissioner as well as the Ogun State Government to ensure that Bilikisu’s killer was brought to justice.

She said: “We have spent so much money on the case since the police arrested Ajibawo. We have since taken Bilikisu’s remains to the morgue at the General Hospital, Ifo. The police said they would carry out further investigation, which includes a post mortem by a doctor. But they are asking for N60,000 plus another mobilisation fee for an investigation team to visit the place of crime. They said the investigation would establish the accusation that Ajibawo actually raped and killed Bilikisu. Meanwhile, my brothers were around when Ajibawo confessed to killing the girl. To worsen matters, we don’t even have money. My brother is only managing with his work as a driver and our brother, Sakiru, the father of the girl, is only a poor bicycle repairer. We can’t even raise the money for the post mortem and investigation. It baffles me that we have lost a daughter and are still looking for money to get justice. This is a burden too heavy for us to bear. We appeal to the relevant authorities to please help us. We want justice on this matter. I’m sure Bilikisu’s soul would not rest until justice is served. This is too bad.”

A police source told the reporter that the case had been transferred to the State Criminal Investigation Department (S.C.I.D) at Eleweran. He said the suspect would be prosecuted after the conclusion of investigations.