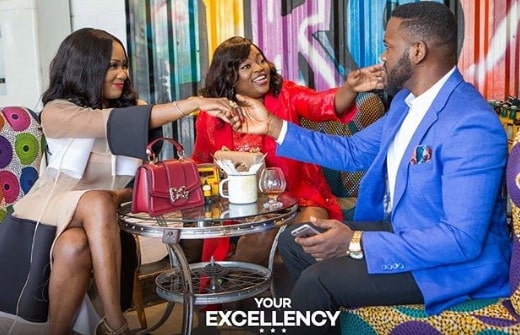 Your Excellency Nollywood Movie Is Silly & Has No Direction – Critics

Everyday, at least ten of the millions of online content creators upload videos to make you laugh. It is silly and has no direction but the audience does not mind because it is meant to be laughable. It is just there to entertain and it is freely available on the internet.

No one wants the same lack of depth for a movie they have paid to watch. That conviction is shaken when ‘Your Excellency’ rolls onto the cinema screen. In the opening scene, we see this couple, jolly and sweet preparing to begin their day.

The Ajadis played by Funke Akindele-Bello (Kemi Ajadi) and Akin Lewis (Lekan Ajadi) know how to have fun and with the comedic duo, the film sets off. Mr Ajadi is a wealthy politician obsessed with Donald Trump. He is contesting in the presidential elections for the third time and absolutely adores Kemi, who is his second wife. This is it.

Every other thing that happens in the movie moves in zigzag fashion. It is only the love story between the Ajadis that stayed true. This is why it is the only plot line in the film that has what looks like a conflict – the return of Ajadi’s first wife weeks before her husband went to the polls.

Other than this, ‘Your Excellency’ lacked a story and some soul to go with it. The film introduces fresh characters as it builds on but they are quite irrelevant to the progression of the story. First, the recap of ‘Who’s your daddy’ by Folarin ‘Falz’ Falana and Beverly Osu who reprised their character from ‘Chief Daddy’ in a very tiny, inconsequential scene.

Second, there is the ‘wannabe’ blogger and celebrity who leads a fake life but goes about blackmailing other characters for irrelevant things. The character, played by Toni Tones is part of many insignificant additions to the movie. This is sad, following Tones’ amazing performance in ‘King of Boys’.

The chief of all irrelevant characters was Osas Ighodaro’s Candy who is married to one-hit wonder Kachi (Alexx Ekubo). The couple has a reality show together and Candy is ready to stake all she has for the fame and pay check. Somehow, it feels as though the writers included them as an afterthought.

On a closer look, audiences can assume that their lives were set as a parallel to the love story of the Ajadis who were real and honest with each other. Whatever the motivation for adding this was, it made no sense whatsoever.

In the midst of all these, there was an election bid that needed to be won. This means that a slew of presidential candidates were paraded on screen apart from Chief Ajadi. This is where Mr Idehen (Deyemi Okanlanwo) comes in.

He is supposed to represent the younger, smarter generation on their way to change the political landscape of the country. His character starts off on a high note but lost flavour way too soon when the focus became his love interest. Suffice it to say that his character was ruined by the social media antics.

The film looked as though Ebonylife asked its marketing team to write several social media campaign copies that will help the studio trend. It is not clear that the intention was to make a film, albeit a good one. This is because a lot could have been done with Deyemi’s character and the presidential debate scene showed that.

Viewers were deprived of what could have been an amazing political comedy, satirical enough to represent the current political landscape. Instead, what they got was a string of Instagram skit videos, retinue of unnecessary actors and underdeveloped characters that makes the ‘holiday film’ super hard to watch.

The film, which is Akindele-Bello’s directorial debut, brings in too much of everything and eventually ends up doing nothing. Maybe if the ‘Ajadi dance’ counts, it would not be a total drop.

Yet, it is clear that there were high hopes for what the movie could have been and audiences see it once they watch the movie that the diamond they thought they had found was mere shiny pebble.