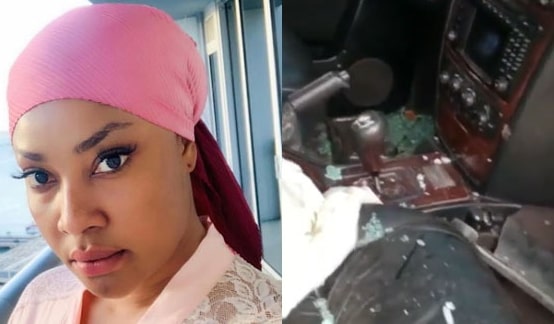 Angela Okorie: How I Escaped From Hired Killers

Nollywood actress Angela Okorie is presently recovering from bullet wounds after being attacked by some unknown gunmen in her Mercedes G-wagon.

The incident reportedly happened when the singer was returning from a show she went to perform, on December 12.

The news came to the attention of the public when blogger Stella Dimoko-Korkus, posted a photo of her bloodied face and video of her damaged car.

Angela revealed in a new video on Sunday that, the attackers asked her to open the door of her car so as to take her away, but she declined, and at that the gunmen started raining bullets on her G-wagon for over thirty minutes without help from anywhere.

She said ten bullets were removed from her head, and her hair were shaved to allow the bullet wounds heal fast.

Angela assured her fans and friends that she will be back, affirming that it was God who saved her.

Continue Reading
You may also like...
Related Topics:angela okorie, killers