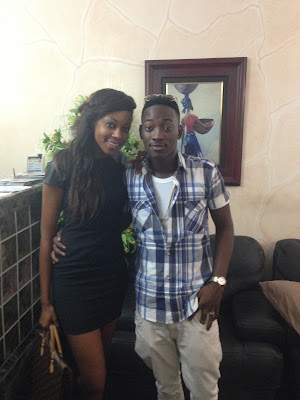 Contrary to the story making round that she is dating Dammy Krane, Yvonne Nelson has distance herself from the story.

See her tweets below;

You really need to get your facts right…I wonder where she gets her stories from..like really? So just because he mentions my name in a song that means I’m dating him.
Its like Peeps wake up in the morning guessing and deciding who Yvonne Nelson is dating. I’m a very jovial lady my keeks are proof. I have keeks with Majid, John, Dammy,etc. They are sweet and adorable guys love them

This case is officially closed.

Ghana-born actress Yvonne Nelson is not a new face to Nigerians and Nollywood fans worldwide.

According to insiders, the lovers started dating a month ago.

In the past Yvonne Nelson has dated music stars like Ice Prince, Iyanya and many others.

The actress made known her intention to quit singlehood few weeks ago.

Yvonne herself confirmed this new romance via her Twitter page

Watch the video of Dammy Krane and Yvonne Nelson together below

Hope this is for real and not just a cheap publicist stunt.