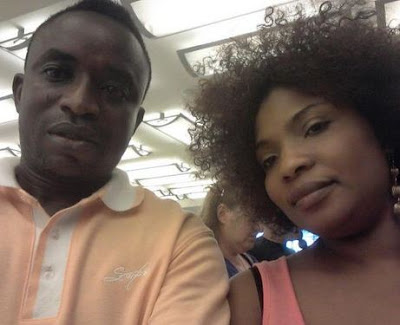 May 15, 2013 –Laide Bakare’s Dumped Husband Wants DNA Test For Daughter “She Dumps Her Baby In America For 8 Months In Order To Sleep Around”

This came after the actress made her intention to marry a Lagos-based businessman identified as Tunde Oriowo who recently lavished the actress with a Range Rover taken from another actress (Bisi Ibidapo Obe) and a house.

To cut the long story short, Laide Bakare’s estranged husband who is based in Washington, DC spoke with Encoumium magazine about the wayward lifestyle of the actress Laide Bakare who is in the habit of sleeping with different men.

Your wife, laide released a statement that she dumped you for another businessman, Mr. Tunde Oriowo because she realised that you were legally married to another wife who had given you two children, not actually single as you told her when the relationship started?

How could I have married two women legally in Nigeria?

I should be in Jail by now because there is a law that condemns such an act. How come she has not gone to court instead of media for separation? Separation can only come through the court.

American government gave Laide Green card because she is legally married to me, we had a court marriage in Nigeria also. When she was supposed to be a faithful wife, she would leave her matrimonial home to stay with married men in Lagos, all in the name of being actress or career lady.

I couldn’t monitor her because I am not always in Nigeria. In fact, there was a time she left our baby, Similoluwa with me for eight months in America in the name of career lady, i had become a nursing father. I have been trying to manage my home the way i could.

Are you Insinuating she cheated on you?

Yes, Of course! She did both in the past and now, all in the name of being career woman.

If she is cheating on you both in the past and now, can you be sure of your child’s paternity?

I have made up my mind that my doctor should begin the process of DNA of our daughter to know who is the father, whether Mr. Tunde Oriowo or myself.

As we speak, she brought Similoluwa back to Nigeria illegally and as we speak, the child is under her mother’s care.

From serial husband-snatching to serial separation….

This is becoming too much.