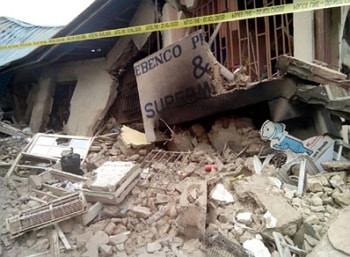 A man died on Saturday night after a building collapsed on Moore Road in Ile Osun state.

The victim of the building collapsed is an unidentified young man who was found in a state of coma beside the debris around 11pm.

Sympathizers rushed the victim to Obafemi Awolowo University Teaching Hospital where he was pronounced dead.

Eyewitnesses said there was a loud noise and heavy dust before the building caved in .

It was gathered there was a controversy over ownership of the house after the death of the owner.

A popular surveyor who lives in the area, Mr Olagbaju Kunle said the manner in which the building collapsed was an indication of a security threat.