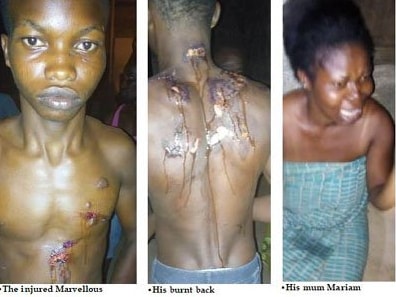 A 17-year-old boy has relived his travails in his parents’ hands.

Marvellous, a candidate in the ongoing West African Senior School Certificate Examinations (WASSCE), claimed that he was chained by his dad, marine captain Blessing Erewa, and burnt with iron. He is pleading that he be taken away from home.

Marvellous claimed that he was beaten, chained, dragged naked on the street and burnt with iron by his father last Sunday in their Ifedapo Estate, Abuja Lasori, Owode Ibese, Ikorodu, Lagos home.

He lives with his parents and two younger siblings on Alhaja Olaitan Avenue in the Estate.

Oti added that the case has been transferred to Gender Section for thorough investigation and prosecution.

Erewa’s wife Mariam, a trader, and the other two children are no longer in Lagos. Marvellous is currently undergoing treatment.

Marvellous told our reporter that it all started on Saturday when he asked his dad for money for his exam.

“I am to begin WASSCE on Wednesday, but my father had said he will not complete the N10,000 payment for the exam because I don’t do most of the domestic work in the house. This made me to go out last Saturday to search for the N10,000 but I came back home very late. When I got home, my mother was angry with me because she was not feeling fine and I went out. I explained everything to her but she was mad with me and she reported me to my daddy; I was afraid to enter the house because I know my daddy is violent and he would beat me. Daddy sent me out of the house, he said he does not want to see me at home nor anywhere around, so I slept in an uncompleted building in the community.

“The following day (last Sunday), I was at one of my friends’ place close to my area, but around 7pm, my father came and met me there; he said he has told me that he does not want to see me in the community or anywhere around. He beat me there, stripped me naked and dragged me from there to our house, less than three kilometres away. A lot of people tried to ask him what the problem was, but he did not answer them. When we got home, he used a dog chain to beat me. The chain hit me on my private parts and I got injured. While that was ongoing, my mother was boiling water, daddy wanted to pour the hot water on me, but I don’t know why he changed his mind.

“While I was chained, my mummy poured the urine of my younger ones on my body and she spat on me. This is the second time that my daddy has used hot iron on me. He unchained me the following day (Monday morning) and told me to go outside the house. While I was outside, I was feeling ashamed because people were looking at me; he later told me to go away for a while that he does not want to see me. Later he told me to sit down somewhere, but I could not sit, because the pain was much. I then wore a condemned shirt and went to one of my church members, who took care of me till that Monday afternoon.

“I went back home in the afternoon, my mummy insulted me; she told me ‘that is good for you’. I told her that a responsible mother will not say what she is telling me and that a responsible mother will not see her son go through what I went through the previous night. I later left the house. She told my daddy that I came home to insult her, my daddy came to the place I usually play games, when he got there, he beat and dragged me home again, he wanted to break the television in the place but people prevented him. On our way home, he saw some members of the Community Development Association (CDA), he reported me to them that I was too stubborn. I just removed my cloth to allow the people to see my body with the iron burns; they were angry with my father, and they told him to treat me.

“Daddy took me to the hospital that evening and we went back home. On Tuesday morning, he went to work, my mummy went out too and did not leave food for me to take my drugs. I didn’t have a choice than to go to the neighbourhood and they gave me food to eat.

“I did not go back home that Tuesday night because my daddy had earlier told me that he was going to take me to the village to go to live and suffer there.”

Marvellous claimed that his parents always beat him, adding that he was never comfortable staying with them, because they are not friendly with him.

He admitted that he used to steal in the community, noting that he stole because his parents don’t give him food.

“I have stopped stealing; I don’t want to live with my parents again. My exam is on Wednesday and I want to write it but I am yet to get the balance of the payment,” he said.

The CDA Vice-Chairman, Mrs Yeyeseun Osundairo told The Nation that the community got to that Marvellous steals because his parents were not feeding him. Mrs Osundairo said: “We advised him to stop stealing being a young boy and told him to rather ask for help than steal. The boy has stop stealing; he asks for help or does small jobs in the community and gets money for it. But since he stopped stealing, we discovered that his father always beat him.

“When I heard of the incident and I asked his mother what happened. She told me that her husband dragged Marvellous into a room, chained him and used hot iron to burn him because he did not wash plates.

“We took the case to Ipakodo Police Station in Ikorodu. Blessing ran away but Mariam was arrested. I don’t know how they resolved the matter at the station, but to my surprise Marvellous and his mother were back home the next day.

“The following day, we saw Marvellous on the road side; he said his parents sent him away. This made us to take Marvellous back to the police station, his father was arrested but we do not know the whereabouts of his mother and his two younger ones. Marvellous is still receiving treatment in a hospital,” she said.