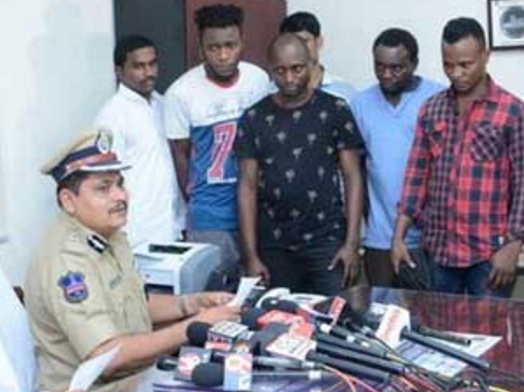 Ten Nigerians have been arrested by Police in New Delhi India in connection to a fake fund transfer case.

The suspects were arrested after the victim, a Delhi nurse duped of Rs 9.37 lakh reported the case to police.

Rachakonda Police Commissioner, Mahesh M Bhagwat, confirming their arrest said, ” November last year, the victim, aged around 36 years and working as a nurse in a hospital in Secunderabad, received an ‘add friend’ request on her Facebook profile from one “Agustin Williams.”

“After befriending the woman, the man told her he wants to send her cash and expensive gifts. To receive these gifts he asked her to deposit “registration fee”. She accepted his request. The person chatting with her on the Facebook messenger introduced himself as Williams, staying at Northern Ireland and working as a pastor.

“After chatting with her for 2-3 months, he told her he wanted to help her by sending a gift box containing USD 50,000 besides an I-Phone, watch and gold through courier, the commissioner said, quoting from a complaint filed by the nurse.

“On March 15 this year, she received a phone call and the caller identified himself as a customs officer working at the Delhi airport and told her to deposit Rs 27,500 in a bank account as registration fee to collect the courier.

“After that, she received many calls asking her to deposit money in different bank accounts citing various reasons such as customs clearance charges, money laundering certificate, RBI clearance, anti-terrorism clearance and fund transfer charges to collect the courier.

“Over a period of time, they (the accused) collected Rs 9.37 lakh from her under previous pretext. As their demand for money continued, she got suspicious and approached the Cyber Cell of Rachakonda Commissionerate recently.

“Based on her complaint, a case under relevant sections of the IPC and IT Act was registered and an inquiry was launched. Based on technical/electronic evidence collected during the investigation, the fraudsters’ place of residence was traced in South West Delhi.

“A team of the Rachakonda police raided their premises last week and arrested the 10 Nigerians, including the prime accused Williams, and brought them to Hyderabad,” the senior police official said.

Upon their arrest, the police seized eight laptops, 26 cellphones, 10 internet dongles, 35 SIM cards from them.