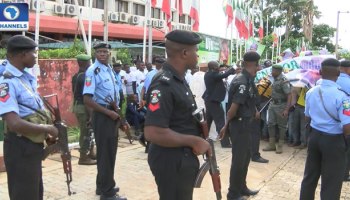 They killed a policeman during an early morning “surprise attack” on riot policemen at Oyigbo Junction in Port Harcourt.

They took away the slain policeman’s gun, injured two other policemen and burnt down their patrol vehicle, the police said.

It was the second day of their attack on policemen in the Rivers State capital. The attacks started following rumours that soldiers had killed members of the group in Abia State.

Rivers State Commisioner of Police Zaki Ahmed, who confirmed the attack and killing, said in a statement: “The command was awaken with yet another attack incident today (yesterday) at about 12:10 am, when some members of IPOB regrouped and launched a surprise attack at mobile policemen stationed at Oyigbo Junction, killing a police sergeant identified as Steven Daniel, attached to Mopol 19, injuring two others and burning down their patrol vehicle.

“Also, one sterling SMG riffle belonging to the deceased officer was taken away by the attackers.

“They were, however, repelled by the police, about nine of them were arrested, bringing the total number of suspects arrested to 32.

“The situation has since been brought under control. People are now going about their lawful businesses. I can assure you that justice will be done in the circumstance. All those connected to this senseless carnage will be brought to justice.

“We shall spare no efforts in dealing with any criminal element in the state.”