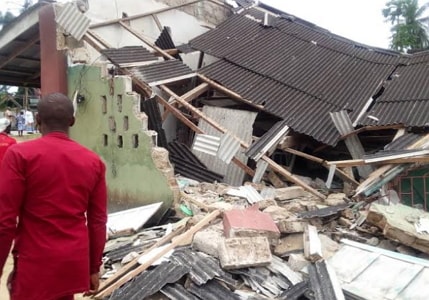 At least 15 worshippers reportedly sustained varying degrees of injury while an 11-year-old boy was confirmed dead .

According to information, the walls of the 100-year-old church started falling while parishioners were waiting for the priest to commence mass around 7am.

The deceased, identified as Jeffrey Jackson, who had successfully escaped from the church hall, was later trapped while reportedly fleeing to a safer place.

The injured, among which were octogenarians, were said to have been rushed to the Orerokpe General Hospital and another private hospital in the headquarters of the council.

They were all said to be in good condition when our correspondent visited both hospitals with the state Commissioner for Works, Chief James Augoye, who led a government delegation to the scene of the collapse on Sunday.

A witness and vice chairman of the church, Mr Daniel Agiri, said the incident occurred after the foundation of a new structure to expand the church gave way.

Agiri noted that worshippers had concluded rosary and morning prayers before the incident happened, adding that over 100 persons were inside the church at the time.

He said, “We were about to commence mass when we noticed a crack on the wall of the building from the altar. The incident happened rapidly. We are happy that the seminarian, who was to conduct mass, had not started. The moment the building started falling, everyone ran to safety. We lost one person and 15 persons got injured.

“We have recovered the deceased’s body from the rubble. Jeffery was a primary four pupil. My son’s leg was also broken. Some of the injured persons are in their 80s. A doctor told us that they were in stable condition.”

Agiri pleaded with the state government and the Warri Catholic Diocese to erect a new building for them to worship, adding that they were planning for the centenary celebration of the church when tragedy struck.