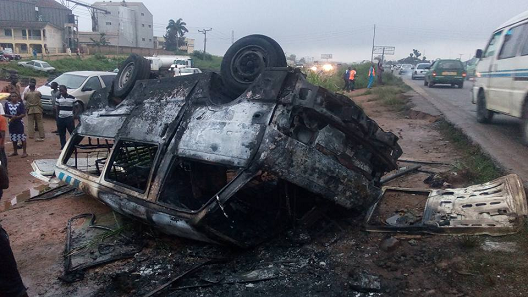 12 people were burnt to death at Academy area on the Lagos-Ibadan Expressway yesterday, Oyo State in a Lagos-bound commercial bus that loaded at Iwo Road.

Daily Sun gathered that the Hiace bus somersaulted several times and went up in flames. The bus driver was said to have lost control when he tried to escape from a task force of the National Union of Road Transport Workers (NURTW).

Eyewitnesses said two ladies escaped death. The 12 passengers were burnt to death, as bystanders could not save them.
One of the survivors, who introduced herself as Kemi, said she boarded the vehicle at Oremeji Agugu.

“After boarding, we discovered that he (the driver) was being pursued by the task force of the NURTW, for contravening the laws of the union. He was not supposed to pick passengers by the roadside. He was supposed to register at any of the designated garages and parks.

“So, after picking us, they started pursuing him. We begged him to stop for them but he refused since we were about 14, including the driver.”
An eyewitness, who preferred anonymity, alleged that the bus used by the NURTW task force drove away immediately the bus started tumbling.

“I am sure they knew that they had killed over 12 people just because the man did not patronise them at their park. This is sad. Government must do something about this.”

See photos from the scene of fatal accident 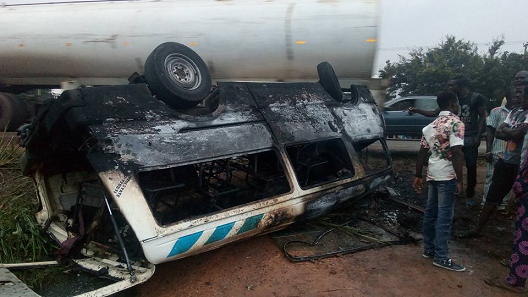 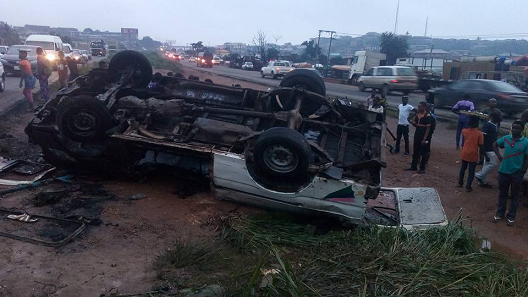 Continue Reading
You may also like...
Related Topics:arrest, driver, police