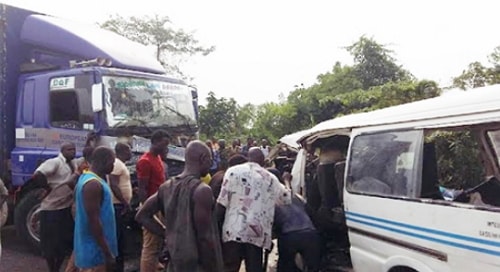 12 people died today in a road accident that happened on the Lagos Ibadan Expressway.

According to Road Safety Officials, a commercial bus collided with a truck this afternoon at the Ogunmakin axis of Lagos Ibadan expressway near Foursquare Camp.

The bus with registration #AAA886XR in a bid to overtake a vehicle rammed into an oncoming truck marked LSD138XQ .

12 people including the driver died on the spot while 5 others survived with life-threatening injuries.

The corpses of the dead victims were taken to FOS Mortuary in Ipara Ogun state while the injured victims were rushed to the Ife Oluwa Plus Hospital in Ogunmakin Ogun state.