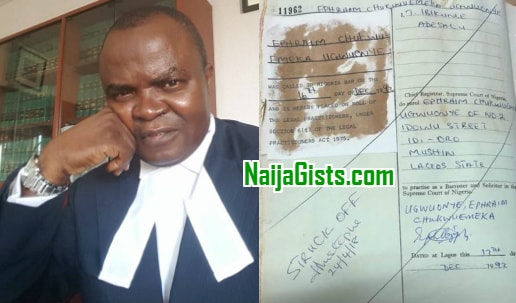 The Supreme Court in Abuja has finally struck out the name of controversial Lagos Lawyer, Emeka Ephraim Ugwuonye from her Roll.

In a letter dated 24th April, 2018, entitled: Re-BB/LPDC/217/16 Nigerian Bar Association V. Ephraim Emeka Ugwuonye; with reference number: 197/SCN/LIT/100118, addressed to Euphraim C. Ugwuonye, signed by Gertrude B. Bari-Nyana Esq (for the Chief Registrar) and made available to our Correspondent, the apex court conveyed the news.

The letter reads in part:

“The said notice is dated 22nd day of May, 2017 and in the absence of an appeal after the stipulated time within which to appeal has lapsed, the name UGWUNONYE EPHRAIM CHUKWUEMEKA is hereby STRUCK OFF the Roll of Legal Practitioners”

“UGWUNONYE EPHRAIM CHUKWUEMEKA is not entitled to practice as a Barrister and Solicitor of the Supreme Court of Nigeria.”

“Any letter issued to you before now, with regards to your enrolment status is null and void, with immediate effect”

According to records in a Certified True Copy of the Body of Benchers decision, “the complaint against Ephraim Emeka Ugwuonye Esqr (hereinafter referred to as the Respondent) Legal Practitioner of ECULAW and Co. 25 Adeyemo Alakija Street, 2nd Floor, Victoria Island Lagos, is an allegation of Breach of Trust to wit; failure to disclose personal interest in subject matter of Client’s brief. The Petitioner, one Ms. Victoria Ekweani alleged that she engaged the services of the Respondent to secure and protect her interest as next of kin in the estate of her late sister, one Ms. Ifeoma Ekweani. Petitioner however alleged that Respondent failed to execute his brief, but rather filed an application at the Enugu State Probate Registry for the issuance of Letters of Administration to the Respondent in his purported capacity as Fiancée and creditor to the deceased. Ms. Ekweani’s Petition was investigated by the Nigerian Bar Association Disciplinary Panel ‘B’, Lagos, which considered all available materials…..”

In its ruling, the Body of Benchers found Ugwuonye guilty.

“We, that is, the Legal Practitioners Disciplinary Committee hereby find the Respondent, Ephraim Emeka Ugwuonye guilty of infamous conduct in the course of the performance of his duty as a legal practitioner as set out in Count 1, of the Complaint (as already indicated in this Direction) contrary to Rules 23 and 55 of the Rules of Professional Conduct in the Legal Profession 2007 and punishable under Section 12- (1)- (a) of the Legal Practitioners Act, as amended.”

“We are satisfied that the appropriate order to make in the circumstance is to direct the Chief Registrar of the Supreme Court to strike out the name of Ephraim Emeka Ugwuonye from the Roll of Legal Practitioners and we so Order. Our Order shall forthwith be brought to the attention of the Chief Registrar of the Supreme Court. We further Order that Notice of this Direction be immediately brought to the attention of the Respondent by service on him personally or to his last known address and by publication in any Edition of The Punch Newspaper and also by publication in the Federal Gazzette as required by law.”

The latest letter issued to Mr. Ugwuonye by the Supreme Court puts to an end the controversy over his enrollment status in the Nigerian Bar. The enrolment number: SCN019368, belonging to Ephraim Emeka Ugwuonye is struck out of the Supreme Court Roll. 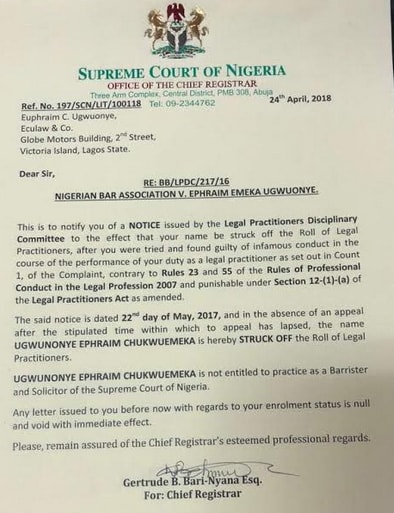 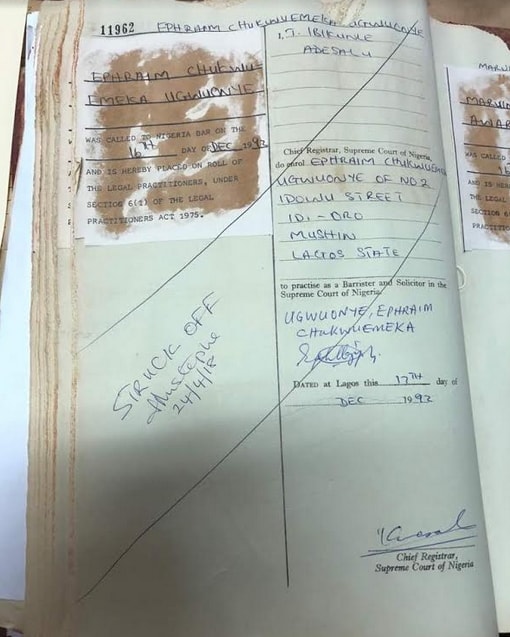 Meanwhile, investigations reveal that the family of the Petitioner, Ekweani, in Enugu State are mobilizing to approach relevant law enforcement agencies to commence criminal prosecution of Mr. Ugwuonye over breach of trust. If the prosecution succeeds, he may be facing a 7-year jail term.