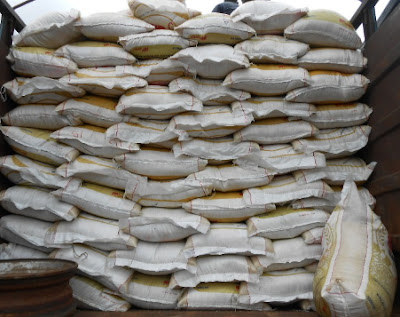 The Nigerian Customs Service (NCS) has impounded 31 containers laden with rice, estimated to be worth around N74m from China.

Speaking to newsmen on Friday in Lagos, the Comptroller General of the NCS, Col. Hamid Alli (Rtd) stated that the service intercepted 31 rice laden containers falsely declared as containing yeast by an importer at the Tin-Can Island Port in Lagos.

The Customs CG who was represented by the Deputy Comptroller General (DCG) of Customs in charge of Enforcement Investigation and Inspection, Dan Ugo explained that. “An importer by the name Destiny Limited brought in 31 containers of rice and declared them to be yeast.

“Yeast is supposed to be 5 percent of duty while rice attracts 10 percent plus 60 per cent levy. So the implication of this if it had scaled through would have been about N74m loss to the Federal Government.

“The 31 containers of rice would have short-changed the Nigerian government about N74m. We are talking about over 14,000 bags of Thailand rice brought in from China. However, due to eagle eyed security operatives, this anomaly was intercepted.

“The era of somebody having false declaration, and then thinking Customs will ignore it and just ask him to go and pay the correct duty is over. Anybody caught will be prosecuted according to the laws of the land.

“The manifest of the containers stated right from the port of origin that the containers contained yeast. It shows the criminal mindset of the importer who is now at large.”