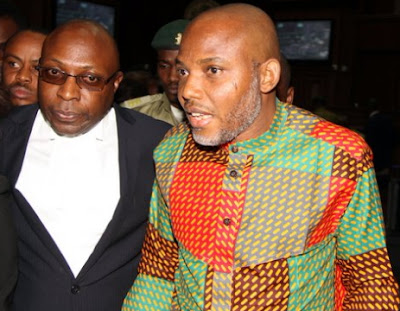 Mazi Nnamdi Kanu’s lawyer Barrister Ifeanyi Ejiofor has petitioned the European Union against the Federal Government of Nigeria over the continuous detention of his client by the FG over treasonable felony allegation.

In a petition with charge #FCT/ABJ/CR\383\15 obtained by Saturday Telegraph yesterday, Ejiofor accused the FG of manipulating the judicial process at all level to keep Kanu in detention.

“We are solicitors to Nnamdi Kanu,the 1st defendant in the above caption, criminal charge, here in after refers to as ‘our client’ and on whose definite instruction we write to the European Union on the ugly direction the politically orchestrated trial of Kanu (a British citizen),premised on a most concocted charges of treasonable felony, is gradually assuming.

“We refer to our previous correspondence in relation to the above subject, reservation, worries and well informed fears expressed there in. In keeping with promises made in the aforesaid letter,we find it obligatory to keep the EU abreast of the happening, the petition read.

“The application was heard on February 19 along with our counter Affidavit filed in its opposition. In a well considered ruling delivered by the court on the same day, the court refused the prosecution’s prayers that sought for secret trial, among other reliefs, consequently ordered that the trial will be conducted in the open.

“In effect, the court granted an application for secret trial of our client, a British citizen, obviously sitting on appeal against his order made on February 19. In the face of this deliberate plot to perverse the course of justice, we promptly appealed to the court of Appeal Abuja Division, to set aside the later order for secret trial made by the court.

“The defence team was once again faced with the worst intrigue, carefully orchestrated by the state to hamstring our client’s constitutionally guaranteed rights to fair hearing/trial in the matter. “We shall object in a very strong term, any form of secret trial in the case.”