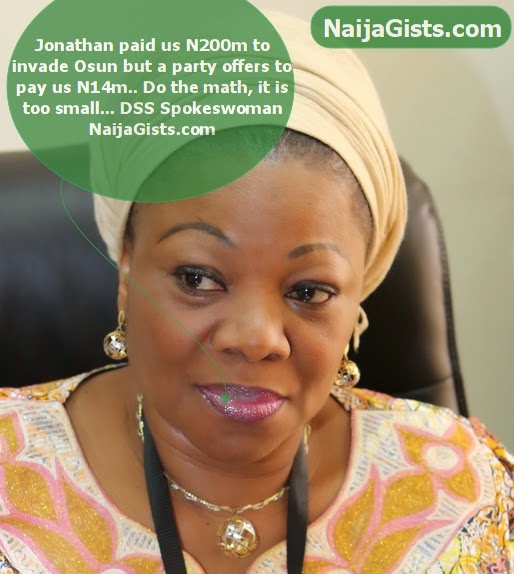 Read excerpt of DSS spokeswoman’s speech in Abuja today about the alleged 14 million offered to them by a political party in Osun State on Saturday.

Marilyn Ogar, spokesperson for the DSS who revealed this at the routine briefing of National Information Centre in Abuja said the rejection of the N14 million was at the root of criticisms of the actions of the DSS officials who participated in the Osun election by the unnamed political party.

Ogar, who asked politicians not to drag the security forces into politics added that officials of the service could not be induced with money.

“The director that was in charge of election duty for the DSS was asked to come and collect N4 million for himself and N10 million for the men, but the offer was declined and that is the offence that the DSS has committed.

“The rejection of the money is bringing up a lot of misunderstanding between political parties and the DSS, it is unfortunate.”
“We are well paid, I will say it categorically, our operations are well funded, N14 million as against N200m that was spent, which one will you go for.

“People should stop using money to entice security forces. The federal government and the people of Nigeria who have engaged us have the capability of taking care of us,” Ogar said while noting that the presence of DSS officials on ground helped to prevent attack of some traditional rulers during the election.

“We thank God that APC won the election in Osun State. There was no bomb blast because there was enough security presence on ground.

“The security forces that assisted in the election in Edo State were the same ones that went to Ondo, Anambra and Ekiti,”.

Come to think of it my people, if the election was won by SSS-supported party, would she have said the jagbajantisi (lol) she just uttered?????

Her story is nothing but a fabricated lie. This is to stem the criticism of the agency for being partisan. Explain why people were arrested 24 hours before the election for doing nothing.

Ok let’s assume they offered to pay them bribe, should the right thing not be to arrest and arraign such people? Abi na PDP offer the bribe? Or is this falsehood to smear another popular party??

This Jonathan madam is doing more damage than good to the agency with her words.

Are you not supposed to arrest criminals? or is giving of bribe not a criminal act? Who offered the money? when? where? and why didn’t you arrest them?

Please madam pack well, Nigerians are too smart for this fabricated story. Try another trick.

2 Billion Babies ‘ll Be Born In Africa By 2050, Nigeria ‘ll Have D Highest Birth Rate – UNICEF
Photo: Shoemaker Who Killed ‘Witch’ Mother In Anambra Says He Did The Right Thing