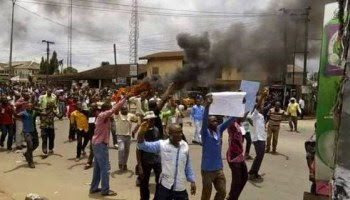 Not less than 15 members of IPOB group were today arrested by officials of Enugu State Police Command.

Enugu Police PRO Ebere Amaraizu said the suspects were caught on Obiagu Road during a peaceful protest to remember the fallen heroes and heroines of the 1967-1970 civil war.

Amaraizu said the attack that claims the lives of several people in Delta State today prompted the police to stop the protesters in Enugu.

However when they refused to obey order, 15 of them were arrested while others fled.