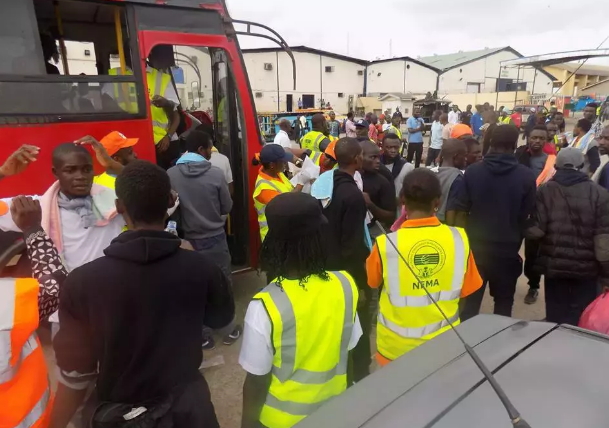 Emotion was high for the 161 Nigerians who were deported yesterday from Tripoli, Libya.

For most of them, the timely intervention of International Organisation of Migration (IOM) saved them from death as they relived their experiences.

The deportees said they were tortured, starved and robbed of money in their possession by Libyan officials at detention camps. 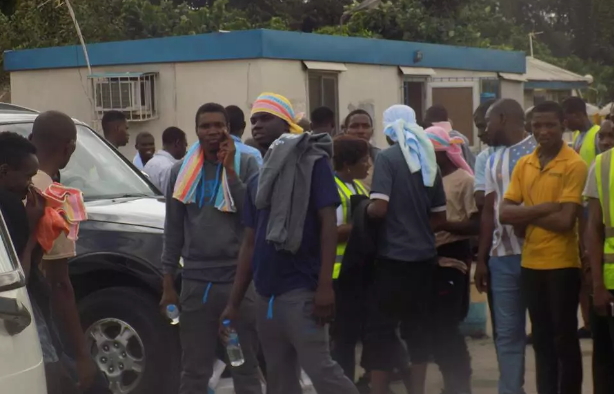 But some of them said they would go back to Libya because it offered them ‘good life’ before everything went wrong. They painted an unsavoury picture of their encounter with the Libyan police, who they said picked them up in their places of work, locked them up and starved them of food for several weeks before they were brought back to the country.

The returnees arrived Nigeria via the Hajj Camp of the Murtala Muhammed Airport, Lagos.

They recounted how their homes were razed down by irate immigration officials and police. They said many Nigerians were killed daily in the country, as some of them said they would go to church to thank God for sparing their lives.

Some of them vowed never to leave Nigeria again in search of the proverbial Golden Fleece. They urged the Federal Government to speedily intervene to rescue over 350 Nigerians trapped in Libya before they were killed by mindless immigration officers. One of the returnees, who gave her name simply as Maureen, said she worked in a salon.

She said the Libyan police, in a Gestapo manner, invaded where she was working and whisked her away to a detention camp.

Maureen said the over N19,000 which was in her possession was taken away from her, adding that she was put in a detention camp for over a month before they were eventually brought back. She lauded IOM for providing them with clothes, food and stipends before and after they were brought back home. Another returnee, Charles Iyem, said he was working in a bakery when they arrested him.

He said: “I was making good money working in a bakery when Libyan immigration officers arrested me and said they wanted to deport me to Nigeria. They took me to deportation camp where IOM now came to rescue us. “Our people are dying there. The Federal Government should do something to bring back more Nigerians in Libya.

We did not eat for days in the camp and they flogged us severely.” They arrived aboard Nouvel Air A320 chartered aircraft at exactly 3:55p.m. The 161 deportees comprised 60 males and 101 females, including children and infants.

They were, however, given £50 each by the IOM to take them to their homes. The returnees were also given a meal of rice and chicken, water and drugs for those who were ill. One of them, a 10-yearold boy, who had undergone surgery, was immediately rushed to an undisclosed hospital for continuation of his treatment.

Head of Sub Office, IOM Lagos, Nahashon Thuo, told journalists that this was the first set of returnees this year. Thuo added that another batch of Nigerians would also return to the country from Libya next week. He said five exercises were done last year. According to him, they usually prefer to bring in returnees in chartered flights to commercial flights because it is cheaper to do so.

Thuo disclosed that the decision to bring them to the country was in conjunction with the Nigerian Embassy in Tripoli which facilitated documentation for them. The representative of the Director-General, National Emergency Management Agency (NEMA), Dr. Onimode Bandele, said a few weeks ago, a video showing the torture of Nigerians in Tripoli went viral on the Internet.

The severity of the situation, he said, prompted government to contact IOM. He said they swiftly moved to bring Nigerians willing to return home, stressing that they were happy to return home after what they went through in Libya.

Evangelist Arrested In Jos For Using Cable Wires To Beat Up His Children For 3 Years
Photo: Boko Haram Members, Brothers Kidnap Boy, Stab Him To Death In Maiduguri Borno State