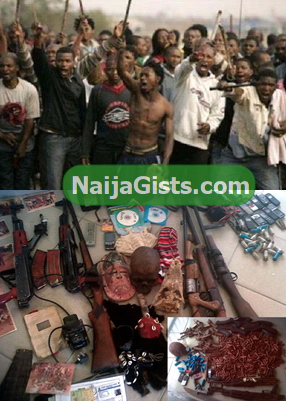 The 18 students were caught by NSCDC for breach of peace and cultism in two different secondary schools in the state.

7 were arrested at Nazareth High School in Imeko in Imeko-Afon LGA of the state while the others were caught at Lisabi High School, Idi-Aba, Abeokuta.

The spokesperson for the agency, Mr Kareem Olanrewaju said the seven students caught at Nazareth High School in Imeko were caught while initiating new members into cultism on Tuesday March 19, 2013 while the other student cultists were arrested on Thursday at Lisabi high school.

Mr Olanrewaju said the arrested student cultists will not be charged because they’re under age.

“ We will not charge them to court because of their age, they are underage and cannot be prosecuted. The command will meet with the Ministry of Education in the state to decide what to do to the students. We observed that they have been misguided, now that they have been caught, there is need to guide them with the right knowledge.

“We want the government to introduce Civic Education in secondary schools so as to reduce the level of these immorality amongst our children. We have discovered in the course of our investigation that parents are not contributing enough to better the future of their children, rather they have devoted much of their time to other things”, Olanrewaju said

Lord have mercy… Cultism is now in our secondary schools..

What will these students become when they reach University level.