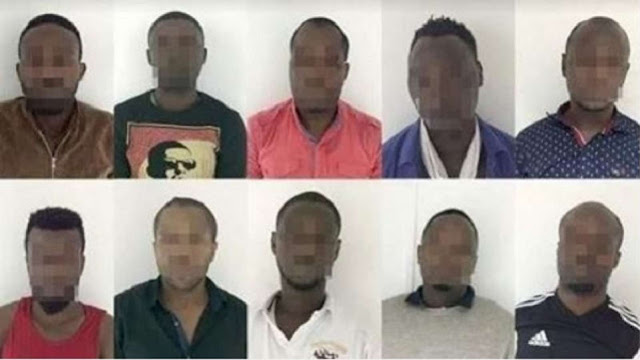 January 9, 2017 – 19 Nigerians Arrested For Carrying Out 4 Major ATM Robbery Operations In The UAE

It was learnt that the police were able to arrest the suspects based on CCTV footages obtained from the banks and money exchange offices.

The police said in a statement that the 19 suspects always target ATM vehicles and that before their arrest they had stolen about 1.8 Dirham equivalent of about N154 million.

The statement added that the suspects were arrested in their apartments occupied by about 30 to 40 of Nigerians at different locations in the country.

“The  robbers were said to have come to the country on visit visas specifically to commit the robbery and in the process of their crime spree; they assaulted security guards accompanying the vehicles carrying the ATM vaults,” the statement added.

“The first robbery was committed at the ATM of the Dubai Commercial Bank on King Abdul Aziz Road, where the robbers assaulted security guards and fled with Dh340, 000.

“Two days after, the gang struck again at an ATM near Saferr Mall in Al Nahda area, where they fled with Dh700,000.

They also attacked a cash transportation vehicle in Al Muweilah area, making off with Dh710,000.

“The fourth attack was at an ATM on Shaikh Mohammed bin Zayed Road but was foiled by the police immediately they got hint about the robbery operation in the area,” Bayat said.

The police chief, however, said the suspects had transferred part of the robbed money to Nigeria while efforts were being made to recover the rest of the loot and return them to their owners.