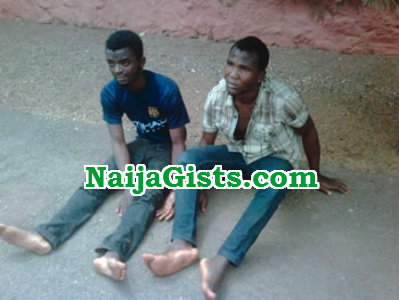 Nemesis caught up with two suspected cultists in Ogun State as they were arrested by the Police operatives attached to Ogijo division of Sagamu command for allegedly robbing some commercial motorcyclists of their motorcycles at gun point on Wednesday in Ogijo.

The arrested suspected cultists are David Abulumen and Mayowa Olajide and they are believed to be members of Eiye confraternity.

In a release on Thursday by the police and signed by the State Police Spokesman, DSP Muyiwa Adejobi, the operatives attached to Ogijo Division of the Command while on surveillance in the area with the members of Vigilante Services of Ogun State, VSO, received a distress call from the victims of the robbery and arrested the suspects at about 11:30 am.

Items recovered from the suspects include a gun, assorted charms and two stolen motorcycles.
The state Commissioner of Police Ogun, Abdulmajid Ali, commended the police and Vigilante Services personnel who arrested the suspected cultists allegedly terrorizing the people of Ogijo.