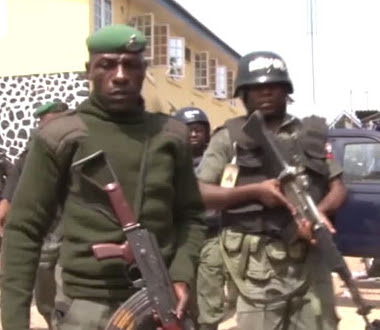 2 Policemen attached to mopol 31, Ogwashi-uku, Delta State have been arrested for alleged kidnapping.

They are being held for their involvement in the kidnap of Mr Umukoro Daniel Efe.
Following  a tip -off the suspects were arrested by the newly constituted Anti -kidnapping committee set up by the Delta State House of Assembly.

In a swift reaction, the acting Police Public Relations Officer in the State, Mr Andrew Aniamaka said: “The two mobile policemen, corporal Oreva and Edom are at present facing disciplinary action, but not on kidnapping.

“There was an alleged case of kidnapping against them, we swung into action and arrested them. Upon investigation, we discovered that it was a case of misconduct and illegal duty on the part of the officers.

A disciplinary action, an orderly room trial is already being conducted on them.

The suspects left their duty post and went to Abraka to effect an arrest based on the complaints by one Edubra, that Umukoro Daniel Efe was owing him N50,000.00 and   needed the assistance of the police to recover the money.