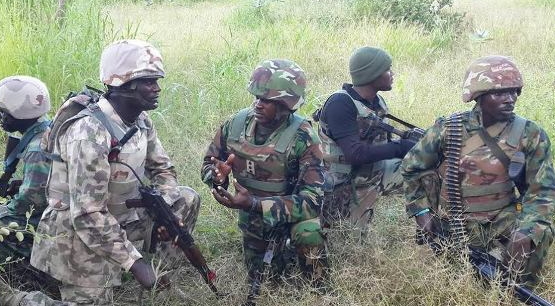 The move of the military to rout the remnant of the “technically decimated” Boko Haram insurgent in Borno State, at the weekend claimed the life of another soldier.

This was confirmed in a statement by the army spokesman, Col. Sani Usman, yesterday. The death of the soldier whose identity was not revealed came barely 24 hours after the Commanding Officer, 272 Task Force Tank Battalion, Lieutenant-Colonel Muhammad Abu-Ali, was killed in Borno.

Col. Usman said the hostages were rescued when the troops conducted “a decisive clearance operation” into the remnants of Boko Haram strategic town of Chukungudu.
Usman said the operation was led by the General Officer Commanding, of the 7 Division, Brig-Gen. Victor Ezugwu, between Friday and Saturday.

“The maneuvering Brigade led by 3 Battalion of 22 Brigade, successfully cleared Geram, Bulankassa and Chukungudu believed to be the Boko Haram terrorists strongholds in that area,” Usman said.

Meanwhile, the army is set to investigate the death of Lt-Col. Abu-Ali.

The death of the officer, Daily Sun gathered, has rattled the top echelon of the service who believe that some persons within the army may have given the enemies details of how a group of soldiers belonging to the Special Forces trained in Belarus, were moved from Mallam Fatori to Maiduguri, on the day of the attack.

A top army source said investigation into the matter has already commenced and some personnel were beginning to tell the authorities what they know.

The source alleged that the issue of Fifth Communist who provided terrorists with intelligence from the military side had been a sore problem.