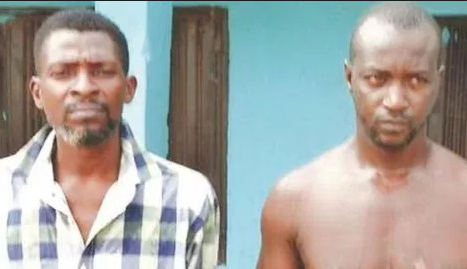 May 31, 2017 – 3 Men Caught Stealing From Abuja Church Members During Service Appear In Court

The trio, whose ages ranged between 40 and 32 are homeless

They are standing trial on a two-count charge of criminal conspiracy and theft.

Mr Fidelis Ogbobe, the prosecutor, told the court that Mr Austin Abua, Chief Security Officer of Our Lady Queen of Nigeria Pro-Cathedral Church, Garki, reported the matter at Garki Police Station on May 27.

Ogbobe said the three defendants “formed a common intention by criminally trespassing into the said Church with the intention to committing an offence of theft.”

He said one of the accused, Salihu, while in the Church, put his hand into the bag of one of the worshipers and stole her handset and N25, 000.

According to the prosecutor, he was arrested in the process which also led to the arrest of his accomplices.

Ogbobe said the offence was contrary to sections 343 and 287 of the Penal Code.

However, the three defendants pleaded not guilty to the charges.

The judge also ordered each of them to produce a reliable surety in like sum.

He said the prosecutor should confirm the internal and external addresses of the sureties, and adjourned hearing until July 26.