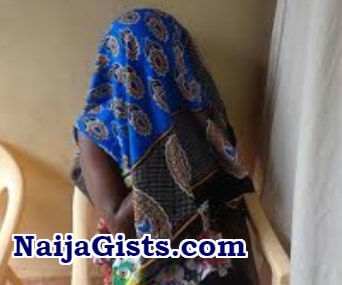 “The love of money is the root of all evil” this favourite quotes has proven true when a 32-year old woman, Elizabeth Elom from Ebonyi State got arrested for allegedly stealing and selling a 2-year old girl, Favour Onwe for N100,000 ONLY. naijagists.com

The wicked woman was arrested on Saturday in Abakaliki. The Deputy Superintendent of Police, Sylvester Igbo who confirmed the abduction said the child’s parents raised an alarm after she got missing not knowing her aunt was the one who stole and sold her.

The buyer of the 2-year old girl, one Nkurika Okonkwo has disappeared after the operation was bursted by the Police.

According to Sylvester Igbo, “The sister of the father of the child was discovered to be the person that stole the child and took her to Akwa in Anambra State where she had contact with the man who connected her to the woman who bought the child.

“The man who connected her to the woman is one Izuchukwu Okeke from Akwa South in Anambra State. So, the person that was alleged to have bought the child is called Nkurika Okonkwo, though the woman is at large. When the woman got wind of police presence in the matter, she abandoned the child and took to her heels and the police came to recover the child.

“The police have been trying to track the woman but it has not yielded any result, we are still looking for the woman. So when the child was brought here, the parent came and identified the child as their child. This happened at Ohaukwu but was later transfered to the headquarters”, explained.

How The Child Was Recovered

According to Mr Igbo, “The person that stole the child is an aunt to the child and when the child was missing, she was worried and was looking for the child, until we got information that she was the last person seen with the child.

When the police mounted pressure and interrogated her, she confessed to the crime saying she sold the child at the sum of N100, 000. That is how police got to know the mystery surrounding the missing child.

Who can one trust again in this world o?