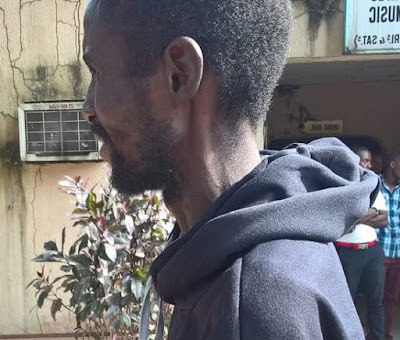 A Nigerian returnee has narrated how some selfish Nigerian human traffickers are behind the suffering of most Nigerians in Libya.

Meet Alex Otoide, who was among the 168 Nigerians recently evacuated from Libya by an international relief organization.

He narrated how his quest for a better life in Europe landed him in jail in Libya.

Here is what Otoide who witnessed the sale of 20 young Nigerian girls told reporters in Benin yesterday: 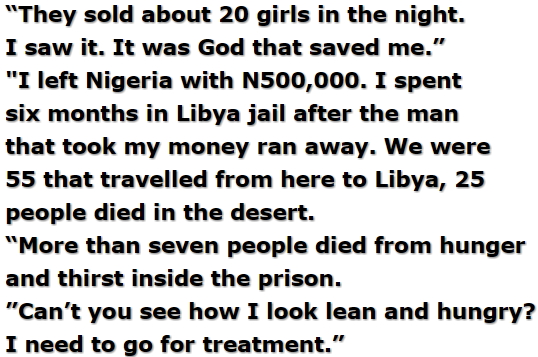 Other returnees who confirmed Otoide’s claim said a human trafficker from Benin, a man simply identified as Charles aka “Connection man” collected all the money they had on them with the promise that he will help them secure it.

Charles who also goes by the name “burgers” is accused of running a transit camp where Nigerians are kept for days without food until they are arrested by Arab slave traders who dress as policemen from where they are taken to torture camps where they are sold into slavery or killed in a brutal manner.

Here is what another returnee Blessing Osas said:

Another returnee who turned down identification request said a Nigerian simply identified as “Biafra” was among those responsible for many atrocities committed against Nigerian migrants in Libya as he was the one taking Arab slave traders to invade the transit camps where migrants are kept before embarking on  deadly trip to Europe.