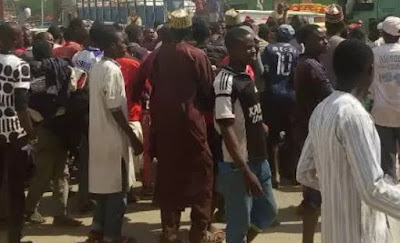 Borno State Police Commissioner Damian Chukwu has ordered police to transfer the case of a mentally unstable man who allegedly hacked two children to death in the early hours of today in Kwaya Kursar LGA of Borno state to the Criminal Investigation and Intelligence Department (CIID) for investigation .

Here is an official statement CP Damian Chukwu released on the attack in Maiduguri today:

“Today Thursday 30/11/17, at about 0930 hours, one Gaji Adamu, male of Kubu village of Kwaya Kusar Local Government Area, suspected to be of unsound mind, armed with machete entered into Jafi Primary School, Kwaya Kusar town and macheted two male pupils to death, while a teacher and a female pupil were wounded in the attack.

“As a result, irate youths mobbed the suspect, who is now unconscious and admitted in hospital under protective custody. The corpses and injured have been evacuated to Gombe General Hospital,” Isuku said.

However, Malam Abdulhamid, a resident of the area, said that three pupils died as result of injuries sustained in the attack.

Abdulhamid, who is also a teacher in the area, revealed that two of the pupils died on the spot while one other child died on admission at the hospital.

“It is not clear how the assailant managed to infiltrate the school.

“He attacked pupils with a machete killing three of them and caused fatal injuries to others.

“A female teacher, Ms Salamatu, was also injured when she confronted the assailant in an attempt to save the children from the brutal attack.

“Some of the pupils sustained injuries while trying to escape. People came to their rescue and arrested the attacker” .