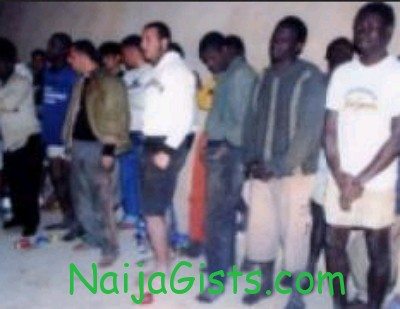 Feb 3rd, 2013 – 21 Jailed Nigerians On Death Row To Be Executed In Jarkata, Indonesia This Week

This week might be the end of life for 21 Jailed Nigerians who are set for execution this week in Jakarta, Indonesia. naijagists.com

According to Sunday Sunday report, Shocking revelations from Jakarta, the capital of Indonesia revealed that over 21 Nigerians are facing death sentences while 31 are serving various jail terms in different prisons in that country for various offences including drug peddling.

Sunday Sun gathered that out of the 21 condemned Nigerians, two of them, Samuel Iwuchukwu Okoye and Hassan Anthony Nwaolisa, were executed on June 28, 2008, while one Augustine Ogbonna died under mysterious circumstance in prison custody in September, 2008.

However, the shocking revelation from the L.P Kembang Kuning prisons and other prisons in the country as revealed by a human rights lawyer based in Onitsha, Mr. Melly Eze showed that 10 Nigerians who were among the 21 prisoners earlier sentenced to death by the Indonesia court in 2008, would be executed this week if the threat from the prisons authority is anything to go by. Mr. Eze in the petition titled: “Shocking Revelation From Indonesia Prisons:

Execution Of 18 Nigerians Scheduled For Between June and August, 2010”, stated that there was fresh threat to execute the prisoners on death row anytime from now if no further diplomatic efforts and pressure were mounted on the Indonesian authorities.

The human rights lawyer recalled that his earlier petition to the Presidency, the National Assembly and the Foreign Affairs Ministry in October, 2008 in respect of the 21 Nigerians on death row and others serving various jail terms in Indonesia attracted reactions from Senator Uche Chukwumerije who moved a motion on the floor of the Senate concerning the matter.

He said that his earlier petition had attracted the attention of the then Foreign Affairs Minister, Chief Ojo Maduekwe, who led a high- powered delegation to Indonesia to mediate on behalf of the convicts and 50 other prisoners serving various jail terms in Indonesia.

“The Senate President, David Mark, wrote me personally promising that the issue would be addressed, just as Dabiri-Erewa granted a press interview where she assured Nigerians that the government was committed to doing everything possible to address the plight of those Nigerians.

So also did Senator Uche Chukwumerije,” he said. “Four years after the delegation to Indonesia and assurances of mediating for the troubled Nigerians, the federal government may not have taken any further steps to get reprieve for the Nigerians.

The visit of Indonesian President, Mr. Suuilo Bambang Yudhoyono to Nigeria today (Saturday) is the best opportunity for President Goodluck Jonathan and the National Assembly to fulfill their promises to get relief for the troubled Nigerians,” the lawyer stated.

The Senate President, David Mark in a letter signed by his Chief of Staff, Mr. Agbo Ogah, dated November 7, 2008, had thanked the human rights lawyer for drawing the attention of the senate and indeed, Nigerians to the ugly situation faced by Nigerians in Indonesia and promised to do his best to that effect after referring the matter to the Senate Committee on Foreign Affairs.

Senator Uche Chukwu-merije also in his letter dated November 13, 2008, also said: “In order to get a clearer picture of the ordeal of these Nigerians, I sought for first hand information via telephone text messages from some of the victims in Indonesia.

Following the Senate summon of the Minister, he led a high-powered delegation to Indonesia where the team interceded with Indonesian authority and returned with strong hope of a change of heart in Jarkata.” Meanwhile, there are fresh fears that some of the Nigerians earlier sentenced to death by the Indonesian court in 2008 may be among the 10 prisoners to be executed any moment from now as stated on the Internet.

It was also gathered that the victims were being kept in various prisons in Nusakambagan Island including L.P Kembang Kuning, L.P Batu, L. P Besi, L.P Pasir Putth, L.P Permisian, L.P Markoba, Bandung, Bali and Medan all located in the city of Jarkata.

This is sooooooo sad.

May God have mercy on their souls.

18 thoughts on “21 Nigerians On Death Row To Be Executed In Jakarta, Indonesia This Week”