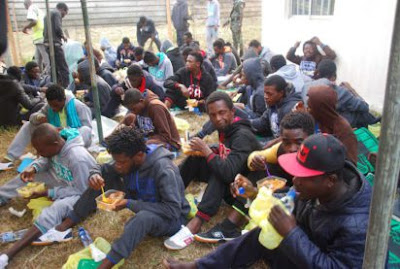 23 Ondo State-born returnees from Libya yesterday narrated their ordeal in the North African country where they had hoped for a better life.

They were received by a delegation, led by Deputy Governor Agboola Ajayi and State Director of the Department of State Services (DSS) Salami Ajege at the State Correctional Centre in Akure, the capital.

The deportees, who landed at the Port Harcourt International Airport in Rivers State last Tuesday, comprised 10 men, 12 women and a baby girl.

A lady, identified simply as Iyabo, said she left Nigeria last April after she was lured by a lady with a promise to get her a house-keeping job in Libya, following the death of her husband.

Iyabo said she was four months’ pregnant when her husband, a mobile police officer, died in a gun battle with robbers on the Ipele/Ifon Expressway.

“I decided to leave Nigeria when things became so hard for me and my kids with the hope that I will return as a successful woman but my dream became shattered after I was turned to a slave.

“On my arrival in Libya, we were sold to an Arab with the promise that we would be paid a certain amount of money. I escaped from them after they failed to fulfil the agreement.

“Already, my children had been sent away from school when I was not able to pay their fees. After I escaped, I engaged in menial jobs to send money to my kids in Nigeria.

“This also failed as I could not send money to them because banks in Libya were no longer working due to the North African country’s crisis.

Another victim, Ife, who is eight months’ pregnant, said she embarked on the journey through the desert of Niger Republic.

She said she and some others trekked hundreds of kilometre day and night.

It was learnt that seven of the women are pregnant.

While most of the expectant mothers returned home with their husbands, Ife’s husband is trapped in Libya.

The soft-spoken woman expressed worry about giving birth in the next few weeks without her husband.

According to her, she and her husband were staying in a transit camp with other West African migrants until the place came under heavy bombardment three months ago during a face-off between two rival armed groups.

Ife said she managed to establish communication three days ago with her husband, few hours after she landed at the Port Harcourt Airport.

Ajayi assured the returnees of government support and reintegration into the society.

The deputy governor thanked the Senior Special Assistant to the President on Foreign Affairs and Diaspora, Mrs Abike Dabiri-Erewa for saving the lives of thousands of Nigerian by bringing them back from Libya.

“We won’t abandon them. They are currently being debriefed and being given medical attention. We are going to take care of them and ensure they are empowered to sustain themselves.”

Ajayi advised those who may be nursing the dream of travelling abroad to learn from the bitter experiences of the returnees and engage in meaningful ventures here with the money they have saved for the trip.

Continue Reading
You may also like...
Related Topics:libya, ondo indigenes