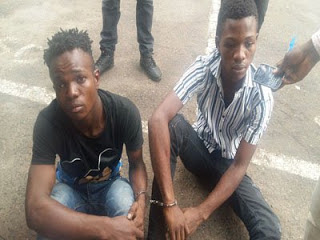 January 30, 2017 – 23-Year-Old Kidnapper Confesses: I Kidnapped My Boss’ Son Because He Refused To Settle Me After 5 Years

Chimaobi, who said he picked the boy from his boss house, said he kept him for four days at a hotel where he worked as a cleaner.

The suspect who was paraded alongside his friend, Emmanuel Blessing, 20, exonerated the latter from the crime, insisting he knew nothing about it.

He said: “I told Emmanuel that the boy was my brother and that he would be staying with me for some days. He didn’t know I kidnapped the boy. He saw the boy when he came to the hotel and asked me who he was. Then, I told him he’s my brother and that he came to spend sometime with me. The next time he came, he saw the boy and I told him the boy would leave on Monday. Then, on Tuesday, we met on the road and I begged him to escort me to the bank so that I can collect ATM. That’s how we were arrested.

“I singlehandedly kidnapped the boy. I wanted his father to pay the ransom and I would use it as my settlement. I worked for him for five years. He’s from Okija in Anambra State and I have been selling clothes for him at Mandalas.

“In the agreement he had with my parents before he took me, he promised to settle me after four years. He started to count my apprenticeship from 2014.

“In 2016 when he was supposed to settle me, instead he opened another shop and asked me to be paying him N20,000 monthly. I could not cope because of the recession in the country, so I asked him to settle me as agreed but he refused, rather he sent me back to the village.

“I came back early January and I stayed in an hotel. It was then that the idea of how to kidnap his son came to me. Last week Monday around 7:30 a.m. I stayed on the route his son normally pass through to school at Alafia. The boy emerged around 7:45 a.m. He came to me when I called him and I took him away.

“I called my Oga on phone the next day to pay N5 million into my account if he wants to see his son again. I sent him my account number. I was on my way to collect my ATM card from the bank along Apapa Road when I was arrested. I never knew that police was on my trail.”

Continue Reading
You may also like...
Related Topics:23-Year-Old Kidnapper, confession