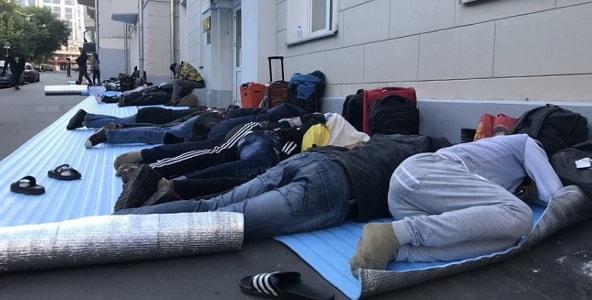 230 Nigerians who got stranded in Russia will be returning home tomorrow.

The Ministry of Foreign Affair’s Spokesperson, Dr Tope Elias-Fatile, in a statement on Thursday in Abuja said over 230 stranded Nigerians had been cleared to board an Ethiopian Airline flight to Abuja on Friday.

He said that the development was sequel to Mr President’s directive that stranded Nigerians in Russia be evacuated with immediate effect.
According to him, the Ministry and Nigerian mission in Moscow in collaboration with the Ministry of Aviation have been monitoring the process of the evacuation.

”As at the last count, over 230 stranded Nigerians had been cleared to board an Ethiopian Airline flight to Abuja.
”The aircraft would depart Domodedovo Airport in Moscow with the stranded Nigerians at 08.30 hours Friday, July, 20th and arrive Abuja at 16.00 hours same day,” he said.

He noted that over 150 stranded Nigerians were among the fans who travelled to the Russian Federation for the 2018 FIFA World Cup tournament that besieged the Embassy of Nigeria in Moscow on July 12th.

The fans according to him, were stranded after the events due to lack of funds for their upkeep as well as allegation that some airline travel agents cancelled return tickets of their customers without their knowledge.