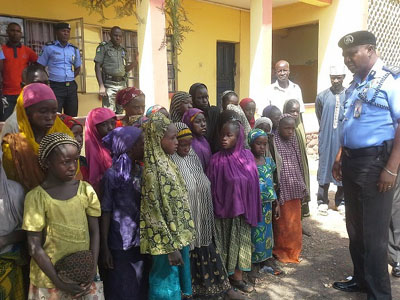 Zainab Ahmad (18), Aisha Abdullahi (55) and Zuliat Abdulmalik(45) were said to have sourced the underaged children, comprising 25 girls and a boy from Kano State.

It was gathered that the suspects were bringing the children to Lagos State to be used for menial labour but were arrested at Ibafo Motor Park on Sunday.

Parading the suspects at Eleweran, Police Commissioner Abdulmajid Ali said the suspects were arrested, following the proactive stance of the command.

Ali said: “Based on our usual stakeholders’ meeting and proactive measures, we got a report that some underaged kids were seen at a motor park at Ibafo.