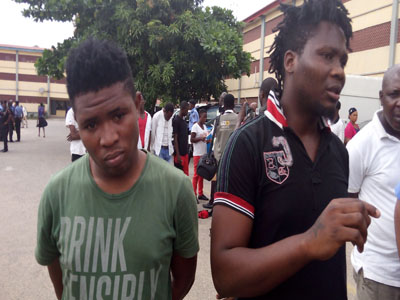 See their individual confessions below:

“I am a hip hop musician and I opened a Facebook account with Tinubu’s picture to attract people. I think it was the person who gave me his account number that made police to find me and arrest me two weeks ago.”

“I work in an health organization but when I lost my job, I was trying to look for money to enable me go back to school. I only gave him my bank account number not knowing that he had bad intention that will end up putting me in trouble. “When I went to the bank to collect money, I was told that my account was zero and in an attempt to know why, police arrested me.”

“I opened a Facebook account using CP Owoseni because it is only way to attract victims. Once they see CP, they would believe everything I tell them and I would get the money I wanted. This particular woman, Mrs Ronke, a business woman is the only victim. I was chatting with her and she ended up paying N20, 000 into my account. I initially told her that I had boys whom I am training in higher institution and I have a foundation that is taking care of it.

“Surprisingly Mrs Ronke told me to come and meet her at Conoil, Ikeja to collect something she wanted to give me as a hard working Commissioner of Police. I asked her whether she knew the size of my shoes and she said it does not matter that what she wanted was to have fun with me. She however insisted that she wanted me to collect the shoe and iPad as a remembrance of our love. She said she had been nursing the idea of having fun with me and that was what she wanted for her life.

“Unfortunately for me, when I came to collect the golden shoe and the Ipad, I was arrested by the police.”

“I was dismissed because my colleague who stole a tyre from a parked exhibit vehicle in police station said that I planned it with him. I tried to defend myself but they insisted that we did it together and both of us were dismissed.

“To help myself and my family, I decided to do something smart. I first bought this uniform and later bought the DSP rank and ID card and uniform for N15,000. I was dismissed from Surulere division in 1984. They framed me up and dismissed me.

“I bought a bus for commercial purpose but my offence is that I hanged this uniform in my bus so that police, LASTMA, KAI, road safety and other law enforcement agents will not disturb me on the road. You can see that the name I used is my real name. I was stopped at Oshodi by police and I told them that I am a police DSP and they paid me my compliment but told me that they still wanted to investigate me.

“It was that investigation and interrogation that gave me up. I tried to bribe them yet they refused and told me that police have changed and that it was no more business as usual. But one thing is clear; I did not rob with it. I only used it to get respect and easy passage whenever I meet law enforcement agents. Please tell police to forgive me, it is due to the hardship I was passing through after my dismissal.”