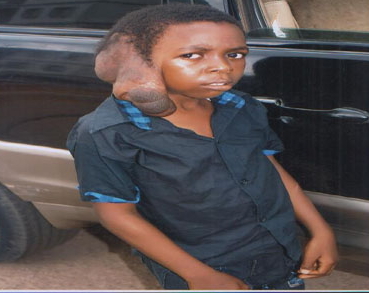 These are hard times for Mr and Mrs Ifedayo of Ikare-Akoko in Akoko North East LGA of Ondo State.

Their 7-year-old son, Oluwatombo, is in dire need of neuro surgery at a specialist hospital in India.

His mother, Stella, a petty trader, said Oluwatombo was one-year-old when it was discovered he had malignant tumour of the ear accompanied by migraine.

She said: “We just noticed that he had severe pains in his left ear as a result of swollen eardrum, which has been dangling and could not be exposed.

Mrs. Ifedayo, who accompanied her son to The Nation office in Akure, said the family sought treatment at the Obafemi Awolowo University Teaching Hospital (OAUTH), Ile-Ife.

She said: “He was operated upon but thereafter his condition became critical.

We moved to another hospital in Lagos from where we were referred to a specialist hospital in India.”

A letter through the Centre for Rehabilitation of Exceptional Persons (CREP) said the treatment would cost from $13000 to $18000, excluding ticket fare, feeding, accommodation and other expenses.

According to the letter, the final bill would be decided on physical examination.

Continue Reading
You may also like...
Related Topics:canal, ear, tumor