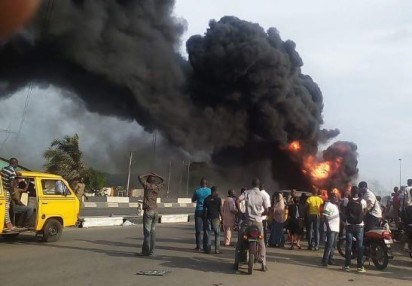 Some residents of Lokoja in Kogi state were yesterday seen scooping fuel from the scene of a fatal accident that claimed the lives of 25 people.

Watch the video below….

The accident which happened around 1:30pm on Friday caused confusion along Okene Abuja Road as many scampered for safety to avoid being caught in the inferno.

A fuel tanker coming from the north reportedly lost control and collided with a fully-loaded coaster bus which caught fire and trapped its occupants who later burnt into ashes.

The bad condition of the road was blamed for the fatal crash.