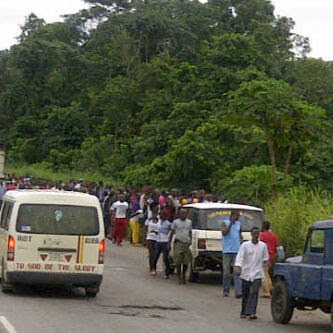 3 passengers who were abducted on Monday by suspected kidnappers along the Benin-Lagos express road have been rescued.

They were rescued on Tuesday night by a combined team of Edo State Police Command and local hunters.

The three passengers comprising two males and a female looked traumatized and exhausted when they were presented before newsmen.

Names of the victims were simply given as Humphrey, Ruth and Kester.

Edo Police spokesman, DSP Stephen Onwochei, said the victims were abducted after the driver conveying them stopped to check a flat tyre.

Onwochei explained that the police joined by local hunters pursued the kidnappers until the victims were forcefully released.

He said clues left by the kidnappers revealed their identities and that they would so be arrested.

The victims said they trekked through hills and valleys and slept in the bush.

They said their abductors numbering eight could not demand for ransom because of the constant movement.

They praised the police for securing their release.