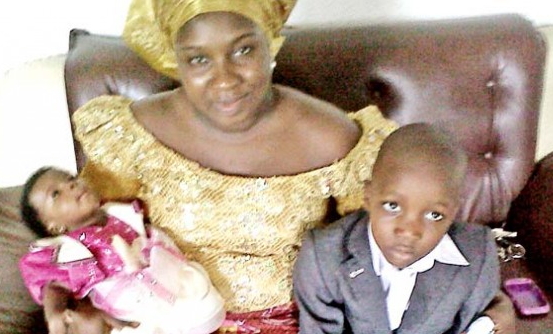 On 4th Avenue in Festac Town, Lagos, sorrow pervaded the air yesterday, a day after a woman and her child were killed in their home by stray bullets fired by robbers operating in the area.

Unaware of the gloom and sadness that pervaded the atmosphere, six-year-old- Chimezie ambled in playfully with his schoolbag and lunch pack from school. With the innocence of a child, he gaily greeted everyone in the living room and sat on the lap of a family member. This action by the young boy, who will no longer experience the warmth and cuddle of a mother, brought tears to the eyes of everyone in the room. For Henry Beluchuckwu, the younger brother to the unfortunate woman, Jane was a mentor, best among the best, a mother, a virtuous woman and counsellor. 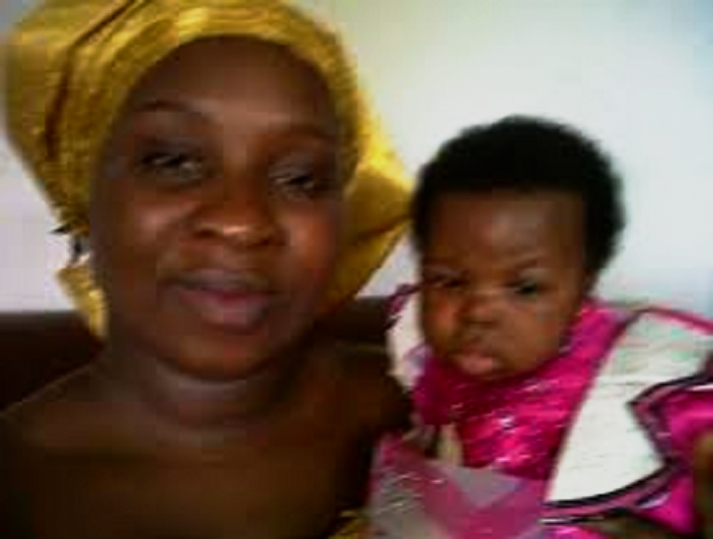 Robbers had laid siege to two banks in the area early on Tuesday morning. They shot sporadically for about two hours while the robbery lasted.

Since the incident, Henry, younger brother to the deceased, is yet to come to terms with the death of his sister, who he believes might still walk out of the morgue alive. The young man, who spoke on behalf of the family, noted that the deceased’s family, friends, co-workers and neighbours have indeed lost a pearl and a lifesaver. From all indications, the family had indeed, been hit by a big tragedy and they have remained inconsolable. Everywhere you turned in the apartment, tears pouring down from grief-stricken faces of family, friends and neighbours greeted you. This was even as splattered blood on the white-washed wall, a tell-tale evidence of the loss, was still left intact. The blood soaked mattress where the little girl was laid after breathing her last, also told everyone of the pathetic killing of the innocent baby. Jane Ndirika, nee Beluchukwu, the 36-year-old mother of two from Umuoji in Anambra State, was, until her death, a nurse with the Igando General Hospital.

The fourth in a family of eight children was said to have also worked at various general hospitals in Lagos State. It was gathered that ironically, the facility where she had worked for years to save lives, could not safe her from the cold hands of death when she was rushed there, after being rejected by a private hospital in Festac Town. She presently lies stone dead in the hospital’s morgue.

Henry, who disclosed that the husband of the deceased, Peter, was still in shock and was unable to attend to visitors yet, asserted that the hardest tragedy to hit any man is the loss of a wife and daughter at the same time. He disclosed that the deceased’s husband has really lost a mother and the backbone of the family. “They have been married for eight years now.

Jane was a very good woman. She was a hustler and does so many things to make ends meet. She was really a definition of a virtuous woman. She was a very enterprising woman and ready to go the extra mile to ensure that the family is comfortable. Despite studying Business Administration, her love for helping people made her to return to school to study nursing. Most patients even come to her home to express gratitude because of her nice nature,” he said.

Shedding light on how his sister met her gruesome, untimely death alongside her 14-month-old-baby, he disclosed that contrary to insinuations that the deceased was videoing the robbers, they were actually hit by a single bullet that ricocheted on the wall after piercing through the side of the door. The bullet, he revealed, pierced through the daughter to the mother while they were in the corridor, trying to take cover. According to him, her life was cut short because she acted as a mother by responding to the cry of her scared baby.

“Which mother would ignore the cry of her child even in the face of death,” he asked.

“I am responding to your question because I believe my sister is not deaf. She was already lying on the floor of the living room alongside her friend and other members of the family when she heard her daughter crying. After picking the child and made to come out of the room to lie on the floor again, they were both hit by a bullet.” Henry disclosed that 30 minutes after the incident, no one in the house could call for help as the robbers laid siege to the whole area.

He disclosed that the child died immediately. By the time the robbers finally left and his sister was rushed to a nearby private hospital, she had lost so much blood. He was, however, very angry that the hospital refused to attend to the deceased and had asked them to get a police report to back their claims about being hit by a bullet from the robbers. He said that was contrary to the directive by the Inspector General of Police, Solomon Arase, that persons with gunshot injuries should be quickly attended to.

“It is really sad. As at the time we got to that hospital, she still had pulse. We had to immediately rush her to the Igando General Hospital after the hospital refused to attend to her. One of the neighbours, Mr. Irabor, helped so much as he kept applying pressure to the place to control the bleeding. He was also calling her name to ensure she remained conscious.”

Henry further disclosed that at Igando General Hospital, activities literally came to a standstill when news of her predicament went round. He noted that the hospital management tried their best to save her life, regretting that she still died despite their efforts. “Everybody that was somebody was in the theatre that day. The place was filled with student nurses, nurses and other personnel. They tried to resuscitate her, opened her up to suture the point of bleeding.

In fact, they did everything humanly and medically possible. The news of her death temporarily suspended work at the hospital. The hospital is in a state of mourning now. That goes to show you the type of person she was. Everybody loved her.” According to a commercial motorbike operator who carried the reporter to the house of the deceased, the type of gun used by the robbers was so sophisticated and was not likely to be in the armoury of the police.

This, he felt explained why the policemen who later responded arrived the scene about 30 minutes later. The man who said he had never seen or heard about such type of robbery, noted that the operation shook the whole of Festac Town “I don’t blame them for not responding on time.

They came when the robbers had gone. The robbers took their time and they were many. It was a well-planned operation that can only be done by professionals,” he said.