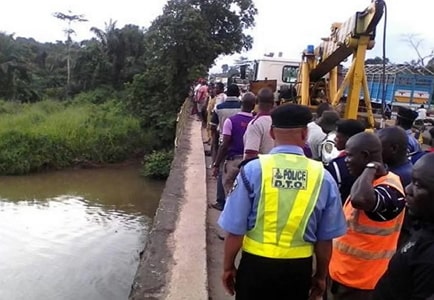 Mr. Clement Oladele, the Ogun FRSC Sector Commander, who confirmed the accident to newsmen in Abeokuta, said that the accident occurred around 10:32 a.m.

Oladele noted that the accident was due to mechanical deficiency which resulted to loss of control of the vehicle by the driver.

“A total of 14 people comprising five male adults and nine female adults were involved in the fatal crash. Eleven people were injured while three persons which included one male and two female died in the crash.

“The lone crash involved a yellow coloured Mazda E220 commercial bus which took off from Ijebu-Ode Motor park for Lagos,’’ he said.

Oladele explained that the injured victims had been taken to Ijebu-Ode General Hospital, while the corpses were deposited at the same hospital mortuary.

He said that efforts were currently on going to evacuate the bus from the river.

The FRSC boss commiserated with the families of the victims and advised motorists to always put their vehicles in good condition before any trip.

Oladele urged motorists to be cautious during the rainy season to avoid road crash.