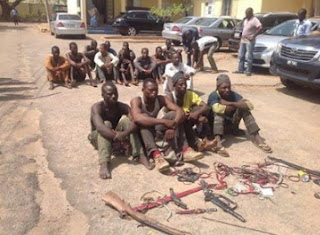 May 2nd, 2016 – 3 Kidnappers Sentenced To Death By Hanging In Delta State Nigeria

A Delta State High Court sitting in Effurun, has sentenced three persons, Augustin Akpojivi, Dawel James and Collins Enye, to death by hanging for the offence of kidnapping.

The Court which also found the three accused persons guilty of three other counts of conspiracy to commit a felony to wit: kidnapping, illegal possession of firearms, demanding property with menace and stealing, sentenced them‎ to 20 years imprisonment with hard labour.
‎
Two oth‎er accused persons were however lucky as they escaped the death sentence, having been discharged and acquitted by the court.

The two discharged persons are the 1st and 5th accused, Samuel Okoloda and Precious Victor Ochuko. They were acquitted for lack of sufficient evidence linking them to the crime by prosecution.‎
Earlier during trial, the prosecution told the Court that Dawel James, a driver by occupation, conspired with Augustin Akpojivi (29), also a driver, and Collins Enye (23), a commercial motorcycle rider; and others now at large, to kidnap his employer, one Rufus Uzoma Allwell, staff of Warri Refining and Petrochemical Company (WRPC), while armed with guns and to demand a ransom of N2million before releasing their victim.

The court heard that Dawel James who was the driver to the kidnapped victim masterminded the kidnap of his boss and received part of the N2million ransom paid by the elder brother of his boss.
But they were however found out by the police.

Reacting to the court judgement, the State Attorney-General and Commissioner for Justice, Barr Peter Mrakpor hailed the court verdict and expressed optimism that the judgement of the court will send a strong signal to criminally minded persons in the State that it was not business as usual.

He commended the exceptional courage displayed by witnesses in the matter who came out willingly without pressure to give evidence in court during trial and called on others to emulate the patriotic spirit put forward by the Prosecution Witnesses.‎

Man Arrested For Breaking Another Man’s Penis During Fight In Apapa Lagos
Photos Of 2 American Pastors, Missionaries Beaten To Death, Killed In Jamaica