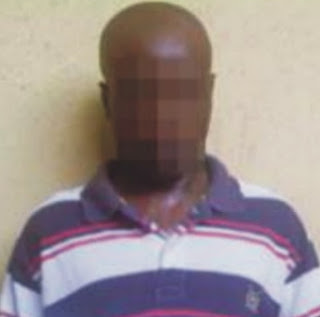 May 2nd, 2016 – Man Arrested For Breaking Another Man’s Penis During Fight In Apapa Lagos

A man identified as Abbey Ahmed, whose penis was fractured during a fight has broken down and wept bitterly at the police station after he realized that he might not be able to perform his sexual duties anymore.

Our correspondent gathered that his penis fractured after a fight between the victim, Abbey Ahmed and the suspect, Allen Edema. The incident happened at Okun Owa, Apapa area of Lagos state, southwest Nigeria where the duo reside.

Ahmed who was rushed to the hospital after the fight discovered that his penis could not erect again due to injury he sustained.

Edema who inflicted the injury has since been arrested and charged before Apapa Magistrate court with assault that caused grievous injury on the victim.

Our reporter gathered that Edema allegedly attacked Ahmed on his penis causing him to become unconscious.

We gathered that an argument ensued between the victim and the suspect with others now at large.
The quarrel resulted in both the victim and suspect engaging in a fight during which Edema injured Ahmed’s penis which led to the fight.

The victim was taken to hospital where it was discovered that he suffered severe injury on his penis and where it was confirmed that he cannot perform again.
After the matter was reported to the police, Edema was arrested and charged to court with the alleged offence.

He pleaded not guilty. The presiding magistrate, Mr T. Abolarenwa granted him bail in the sum of N100,000 with one surety in like sum.

Edema was remanded in prison custody pending he will perfect his bail condition.
The matter was adjourned till 11 May 2016.