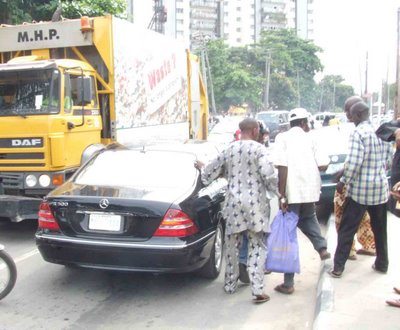 A woman said to be sleeping in her room at Akorohunfayo Street at Fadeyi, Yaba, Lagos southwest Nigeria was one of the three victims who lost their lives to a terror gang of miscreants also called area boys who stormed the area early this morning. naijagists.com

Further investigation revealed that at least 10 area boys invaded the area this morning shooting indiscriminately. They killed the three persons while several others were injured.

Residents told our correspondents that nobody could ascertain the mission of the street urchins or who their target was.

Before armed policemen moved into the area to curb the rampaging area boys, they had killed the three persons, injured several others and set ablaze some houses. Bullets damaged some of the houses in the community.

At press visit, the scene of the incident the bodies of the three victims have been moved to Alakara Police Division in Mushin.

No arrests had been made as at press time.

A resident of the area who spoke to us on condition of anonymity called on Lagos State Governor, Babatunde Fashola and security agents to ensure peace reigns in the community. He said area boys had been killing and maiming innocent citizens at Fadeyi.