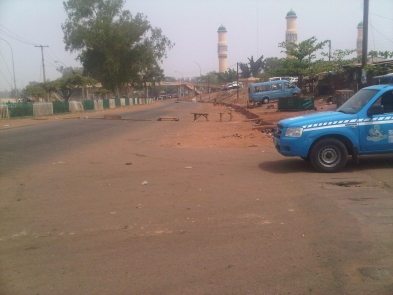 On Wednesday, Soldiers found and safely detonated a car bomb in Maiduguri, the Borno State capital.

Boko Haram is blamed for killing at least 286 people so far this year, according to an Associated Press count.

On Tuesday, a police anti-bomb squad member died in Kaduna after an explosive detonated inside a plastic bag he was examining.

No one has claimed responsibility for that attack.

The first blast happened at Angwar Seriki area of Kaduna near Kano, a very busy area where fully armed soldiers were mounting survellance.

While the first blast went off without any loss of life, the second was devastating as a mobile policeman who moved to the Sheikh Mahommud Gumi Mosque in Kaduna with a bomb detector was blown up by the bomb.

The level of the blast forced residents of the area to run for their dear lives. The pandemonium continued up till late in the day.

Security operatives including soldiers, mobile and regular policemen were drafted to the area to comb for more explosives which might have been planted in the vicinity. The security personnel also cordoned off the Kano area.

An helicopter was hovered around the scene of the blasts, also as part of security measures to curb further explosions in the vicinity.

It is widely believed that the Islamist fundamentalists, the Boko Haram might have planted more bombs in the Kano area of Kaduna. Many residents are afraid that there could be more explosions again. (culled from pm news)

Continue Reading
You may also like...
Related Topics:boko haram, maiduguri